In ‘Bait’, a slippery PR man, Mark Miles, is unaware he’s being manipulated and dangled as bait by an investigative reporter until he’s swallowed by a sadistic mind-expanding cult from America. In ‘Grist’, the bestselling writer, Maxwell Grist, ruthlessly uses real people as fodder for his crime novels before finding himself living up to his name and becoming grist for his own murder. In ‘Security’, an American movie star, unhappy with the film he’s working on, refuses to leave his hotel for the studios, while in the corridor outside his luxury suite mayhem and murder take over.

With thanks to the publisher for the copy received. Bait, Grist and Security is a series of novellas written by Mike Hodges who produced many movies, the most familiar to me being Get Carter. Each one of these I could visualise clearly on TV or in the cinema.
Whilst the main theme of each is different, they do have their similarities. Each feature unlikable people who have more power than they should, each show how easily people are misled by the ones who have the power and the money, each feature some of the more bizarre storylines that I have read and each feature some moments when I couldn’t read for laughing. Especially with the first one, Bait, which was probably my favourite. Not just because it was the longest, but because the storyline was so clever. Even though it did make me cringe.
The way all of the characters are described is brilliant, the author manages to show what they are really like compared to the image they show to society.
It’s all different, very refreshing, at times crude and like a breath of fresh air.

In the early nineties, newlywed Ruth Flint arrives at Echo Hall to find an unhappy house full of mysteries that its occupants won’t discuss. When her husband, Adam, is called up to the Gulf War, her shaky marriage is tested to the core.

During World War 2 Elsie Flint is living at Echo Hall with her unsympathetic in laws. While her husband,Jack is away with the RAF, his cousin Daniel is her only support. But Daniel is hiding a secret that will threaten their friendship forever.

At the end of the Edwardian era, Rachel and Leah Walters meet Jacob Flint, an encounter leading to conflict that will haunt the family throughout World War 1 and beyond.

As Ruth discovers the secrets of Echo Hall, will she be able to bring peace to the Flint family, and in doing so, discover what she really wants and needs?

When I was contacted by the author asking me if I would like to read her book I was delighted. It was the just the type of book that I enjoy reading as a break from crime fiction. I’ve always liked the type of novel that covers generations of the same family where all their secrets are revealed. Some of the people in it are in more than one period and you see the way that life has turned out for them.
The author demonstrates very well how war has a devastating effect on an area, which is more obvious when the community is small. In the beginning it is noticed how many families have had their lives torn apart from more than one war. In the novel it is WW1, WW2 and the Iraq war in the 1990s.
The Flint family are a strange one. Brittle, unapproachable and very unhappy. The novel focuses on the women: Rachel, Elsie, Ruth, Phoebe and Leah. Leah is one of the more elusive characters but it is her actions which have the biggest effect on most of the others. Daniel, Joseph and Jack also have a role but it is the women whose story is told. Their family ties are revealed throughout the novel but much of what happens isn’t revealed until near the end. Attitudes towards the war also play a part. How differing views can unsettle relationships and cause bad feeling in families and in a small community.
But just as destructive as the wars is jealousy and it is this what affects the different generations. It is hard to think that a feeling can cause misery and loneliness for a 100 years, but I have a feeling that it could be common.
My favourite period was WW1, where Rachel gets her chance to find love, but my favourite character was Elsie, and I wished she could have had a happy life away from the Flints.
Virginia Moffatt is an author who I would definitely read again and I would like to thank her for sending me her book to review.

Today it is my pleasure to feature a guest post from Claire Handscombe who is publishing a novel via Unbound.

How to make your characters believable:

My books always start with my characters – I have some sense of who they are, hear their voices in my head, or sometimes just want to write a better version of myself. In Unscripted, Libby is very similar to me, though I made her ten years younger, because I didn’t think anybody would believe that a woman in her mid thirties could have a celebrity crush that is quite as all-consuming as hers. It’s totally possible, of course, that a woman in her mid-thirties would – and I’d know. But the oft-repeated cliché that truth is stranger than fiction is an oft-repeated cliché for a reason. Fiction has to be just that little bit less strange to be believed by our readers.
Unscripted is a multiple point of view novel, and all four characters are sensitive arty types – involved in writing, publishing, and/or acting. They all have something of me in them – Libby most of all – but I didn’t want to make them all a version of me, or different versions of each other. So, as I have with other books in the past, I dived into the Myers Briggs Type Indicator.
If you’re not familiar with Myers Briggs, it’s a personality typing system in which everyone falls into one of sixteen categories, which draws on whether you’re an Extrovert or an Introvert, make your decisions based on iNtuition or the more concrete five Senses, are more a Thinker or a Feeler, and prefer to Judge (plan) or Perceive (let things happen more spontaneously). The different elements come together to form personality types with their own sets of characteristics.
All my characters in Unscripted are NF – those sensitive arty types I mentioned – so it was important that I differentiate them in other ways. Libby is an ENPF, but Dan is an INFJ. ENFPs are visionary types, always excited by new ideas. INFJs are idealistic too, but they’re doers rather than dreamers – one of the reasons why it’s a combination that can work particularly well in friendship.
I also used the Enneagram system – cross-referencing with Myers Briggs and what I already knew of my characters. Each of the nine Enneagram personality types has one basic fear that drives them, and one basic goal. It’s helpful if you can keep those motivations in mind as you write each personality, because it informs how they think and speak. The first time I came across the Enneagram was actually in a book called Dialogue: Techniques and Exercises for Crafting Effective Dialogue (https://www.amazon.com/Dialogue-Techniques-Exercises-Crafting-Effective/dp/1582972893/ref=sr_1_1?ie=UTF8&qid=1524069271&sr=8-1&keywords=writers+digest+writing+great+fiction+dialogue). (Incidentally, that book is from a series by Writers Digest called Write Great Fiction, and they’re excellent for when you’re starting on your writer’s journey.) The author showed how each type might speak, and, importantly, why.
There’s a lot of good stuff online about the strengths and weaknesses of each personality types, and how they interact with the other types. So, for example, Thom is a Type Three: his basic fear is being worthless and his basic desire is to feel valuable and worthwhile. Ebba, his long-ago ex-girlfriend, is a Type Two, which is known for being nurturing and caring for others. They’re both driven by emotional needs and the need for attention and love. Ebba wants to feel proud of Thom and Thom wants to make her feel proud. Ebba wants to put the spotlight on Thom, and Thom wants the spotlight. So far, so perfect. But there are downsides, too: the Type Three’s tendency to become chameleon-like in an effort to feel loved, and the Type Two’s tendency to overwhelm with their attention.
I think the trick is to internalise these things about your characters, and not let these character traits just be abstract concepts, but to think through how each trait works itself out practically. One book that can help massively with that is What Would Your Character Do? by Eric Maisel and Ann Maisel. It puts your characters in all kinds of specific situations – a family picnic, say, or a high school reunion – and gives you options for how your character would react in a number of scenarios. Given what you know of your characters’ underlying motivations, you can start to flesh out how they would be in the world. I also ask my friends what Myers Briggs and Enneagram types they are, and think through my interactions with them, and how they react in different situations. I ask them to help me understand them better.
Of course, just like people in the real world, our characters aren’t just cardboard cutout examples of particular character type – but having an understanding of how they see the world and what their motivations are can help make them three-dimensional, as well as help us figure out what they want and why, which is the driver of so much good fiction.

No-one is a bigger fan of actor Thomas Cassidy than Libby. No-one. That’s why she’s totally going to marry him
She is going to write a novel, name the main character after Thom, and find a way to get it to him. Intrigued and flattered, he will read it, fall in love with her prose, write to her and ask to turn it into a movie. She will pretend to think about it for a week or so, then say, sure, but can I work on it with you? Their eyes will meet over the script, and fade to black. It is a fail-proof plan.
Except for the fact that he is a Hollywood star – not A list, perhaps not B list, but certainly C+ – and she is, well, not. Except for the fact that he lives in America. Except, too, for the teeny tiny age gap. Not even twenty years! Totally overcomable. All of the obstacles are totally overcomable. It’s all about determination.

Claire Handscombe is a British writer who moved to Washington, DC in 2012, ostensibly to study for an MFA, but actually, let’s be honest, because of an obsession with The West Wing. (Like her main character Libby, she knows a thing or two about celebrity crushes and the life-changing power of a television series.) She was recently longlisted for the Bath Novel Award, and her journalism, poetry, and essays have appeared in a wide variety of publications, including Bustle, Book Riot, Writers’ Forum, and the Washington Post. She is the host of the Brit Lit Podcast, a fortnightly show about news and views from British books and publishing.

Twitter — @clairelyman
Blog — britlitblog.com
My other book, Walk With Us: How The West Wing Changed Our Lives can be found at thewestwingbook.com

Claire Handscombe’s novel Unscripted is forthcoming from Unbound.
Unbound are an innovative, crowdfunding-based publisher who’ve produced best-sellers and award-winning books, like The Good Immigrant by Nikesh Shukla. Their model is based on Kickstarter-style pledges, and when a book reaches 100% of their funding, they kick in as a more-or-less traditional publisher. So when you pre-order a book, you’re actually helping to make it happen. You get thanked in the back for being part of the journey, and you can also get various rewards at different pledge levels. So if you like the sound of Unscripted, please consider supporting the book by pre-ordering it at Unbound. 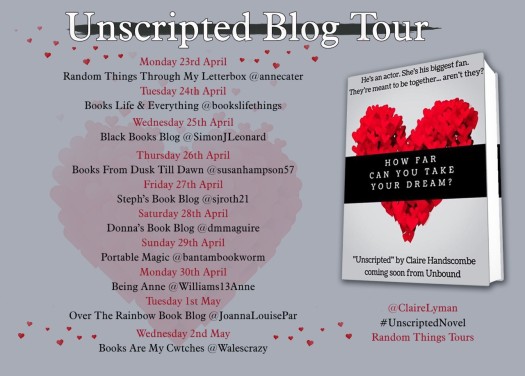