More futuristic thriller than horror, Lost Girl by Adam Nevill is an image of how life could be in the not so distant future. Set in 2053, ‘the father’ who annoyingly never has a name is trying to find his young daughter who was abducted from their garden two years earlier.
The world is everything that our media warns us about. Extreme weather, disease, lack of food and over population has destroyed everything that is taken for granted.
I found it at times quite difficult to read. I didn’t like that the father never had a name, I thought it made him soulless. Although part of me thinks that it was like this because he could be any father searching for his child.
There were not that many characters in the novel but two who appealed more than any of the others were Scarlett and Oleg. Still not likeable as such, but I felt they were stronger because they showed emotion and regret.
There were a few times when I was tempted to put the novel to one side but the appearance of Oleg made me much more interested in reading and finishing the novel.
I feel that this novel is an indication of how this world needs to change to make the future better. Much more preferable to be kept as fiction and not fact.
With thanks to the publisher for the copy received. 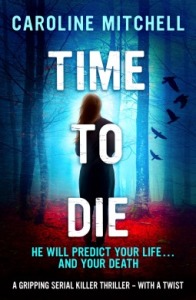 I’ve always felt very uncomfortable with any form of fortune telling so was uneasy straightaway with Time to Die. Tarot Cards worry me more than any of them and they play a huge part in this novel. The Tarot Card reader Bert, is and has always been a loner. Unwanted as a child and also as an adult he is very unlikeable and very convincing in all of his prophecies. Jennifer and Will start to investigate him when a series of suspicious deaths, including that of the future wife of an old schoolfriend appear to be connected to him.
Jennifer is settled in to her position in her unit, apart from Will they all have their own talents within the paranormal. She is however frightened by the number of ravens that seem to be everywhere she goes. The ravens have always been regarded with suspicion in Haven. She is also upset about the unwelcome reappearance of her father.
I didn’t find it as spooky as the first in the series but I did prefer to read it in daylight. The combined detective/ supernatural storyline works very well and I was forever ‘just reading another chapter’. I hope that there will be more books in this series especially if the storyline that was hinted at in the final chapter is the subject of the next book.
With thanks to the publisher for the copy via netgalley.

I am certain that How to be Brave is going to be a huge success. Based on fact, there are two stories running throughout the novel and both are equally addictive. Natalie and her nine year old daughter Rose are struggling to accept and adapt to the fact that Rose has been diagnosed with type one diabetes. To make the injections that she needs to survive less of a battle Natalie starts to tell Rose about her great grandfather (Colin) who was adrift in a lifeboat for over a month during WW2. She adds to the story by reading an excerpt from Colin’s diary that was found in a box of items that belonged to his wife.
The other story focuses on Colin and his fellow survivors after the ship they were travelling on was torpedoed by the enemy. They had to find land before they ran out of supplies, cope with the blistering heat, some injuries and a constant companion -a shark.
At times I was very emotional. Reading about everything that Colin and his friends had to endure, understandably terrified, but still at times trying to make light of their situation.. And then at the same time reading about Natalie and Rose’s relationship being affected by the diabetes. Both very much alike they had to get past the anger and frustration that the diagnosis had brought. But reading about the events that occurred in 1943 helped them both.
I adored this novel. I did cry quite a lot. I don’t think I’ve cried so much over a book since reading Charlotte’s Web when I was about six years old! But while it didn’t make me laugh as such I did smile a few times. The relationship between Mother, Daughter, Colin and his friends was really quite special.
How to be Brave will definitely be one of my top ten books of the year. It’s a hard act to follow.
With massive thanks to Orenda Books for sending me a copy of this novel. 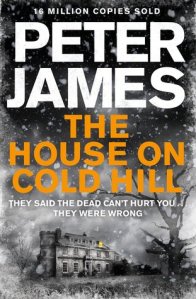 I like a good horror story, not the type that are full of blood and gore but the ones that play with your mind. The ones that have you wary of being in the house on your own and makes you want to put every light on. The House on Cold Hill does all of this and more.
The ‘scares’ started immediately and stayed pretty intense all the way through. A few of them weren’t convincing but the majority had me biting my nails. I don’t want to go into much detail about any of the events, everybody will find different things that bother them more. But for me it was the windows.
I found Ollie and his family to be the most unbelievable part of the novel. How a couple who were very successful in their careers could overlook all of the work that needed doing on the house.
A very good fairly quick ghostly read for anybody who enjoys to be scared.

I was never a teenager who became obsessed with a band, pop star or actor but have heard about those who do in the media. From what I picked up from that source over the years The Blissfully Dead is chillingly accurate.
Teenage girls who worship a boy band are being tortured and murdered. Lennon and his team at desperate to find the killer before more die. They have to find a connection between thousands of forum and social media posts to try and find a link. And then the killing gets much closer.
I like the group of detectives who feature in this series with the exception of one, Winkler. He is just as obnoxious and infuriating as he was in From the Cradle. The only difference was that I could laugh at him as well as snarl. There wasn’t as much focus on Lennon’s private life which I was slightly disappointed in. I hope that we find out more in future books, as well as more about Carmella and Suzanne.
The band and all the people associated with them were believable, some of the fans not so but I did enjoy reading about their antics. I really enjoyed the parts that’s involved Kai, he was very entertaining.
I am looking forward to reading more in this series, I have read both books in the last couple of weeks and enjoyed them very much.
With thanks to Marks Edwards and Louise Voss for the copy received via netgalley.