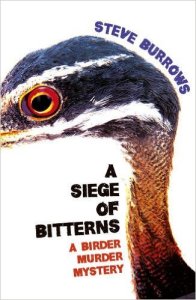 Newly appointed police inspector Domenic Jejeune doesn’t mind ruffling a few feathers. Indeed his success has elevated him into a poster boy for the police. The problem is Jejeune doesn’t really want to be a detective at all; he much prefers watching birds.

Recently reassigned to the small Norfolk town of Saltmarsh, located in the heart of Britain’s premier birding country, Jejeune’s two worlds collide with the grisly murder of a prominent ecological activist. His ambitious police superintendent foresees a blaze of welcome publicity, although doubts soon emerge when Jejeune’s best theory involves a feud over birdwatching lists. A second murder does little to bolster confidence.

Jejeune must call on all his birding knowhow to solve the mystery and deal with unwelcome public acclaim, the mistrust of colleagues and his own insecurities. For, in the case of the Saltmarsh birder murders, the victims may not be the only casualties…

I love reading crime fiction and I enjoy bird watching so I jumped at the chance to read this new book that features both. The first in a new series it focuses on Saltmarsh in Norfolk one of the more well known birding communities in the UK.
Domenic Jejune is new to the area, he was preceded by his reputation when he ended up in the public eye after solving a highly publicised case. Not much is revealed about the case, maybe there will be a prequel or more will be revealed in future books.
I have read some reviews where the reader felt that there was too many bird references but it worked well for me. Perhaps with being familiar with hides, birding communities and the passion shown by them. And not forgetting the birds, some of them I have been lucky enough to see. I did however struggle with some of the environment and political issues, but this is only down to my lack of knowledge. With regards to the crime I had no idea who the culprit was. I probably suspected everybody who featured. There were quite a few red herrings, especially towards the end.
My favourite character was Maik, a well respected extremely likeable person, Holland the complete opposite. Jejune will probably grow on me ( and his team). I think that he will be a character you get to like when you know more about him. I am looking forward to the next in the series that is released later in the year.

With thanks to Real Reader and the publisher Oneworld Publications for the copy received.