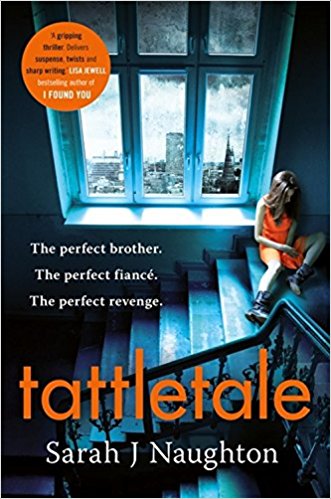 One day changes Jody’s life forever.
She has shut herself down, haunted by her memories and unable to trust anyone. But then she meets Abe, the perfect stranger next door and suddenly life seems full of possibility and hope.
One day changes Mags’s life forever.
After years of estrangement from her family, Mags receives a shocking phone call. Her brother Abe is in hospital and no-one knows what happened to him. She meets his fiancé Jody, and gradually pieces together the ruins of the life she left behind. But the pieces don’t quite seem to fit…

It seems common now, to have a novel that features an unreliable narrator. Tattletale is unusual in that it has three of them. After Abe is seriously injured in a fall, his sister Mags tries to get answers. She doesn’t believe what she is being told by his fiancé Jody and his neighbour Mira also seems to be keeping something back. There are flashbacks, and it isn’t clear who they concern. It also isn’t clear who to believe.
It’s a slow burning novel. At first I wasn’t sure which way it was going to go and my attention slipped a few times. But then, suddenly I was gripped and read the remainder of the book in one sitting. All three women had their problems and all had their own interpretation of the accident. Some of the flashbacks were quite upsetting, even more so because it was unclear whose they were and if they could be believed. At times it was intimidating. The threat from the thugs on the estate and some of the residents in the flats and the childhood  memories of both Mags and Jody.

The ending was superb. So often now I read a novel where there is a loose thread or the ending doesn’t make sense. But everything was wrapped up nicely and all to my satisfaction.