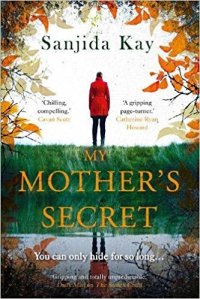 Sanjida Kay is one of my favourite authors and her new book My Mother’s Secret is due to be published on 3rd May. It is my pleasure today to host a guest post talking about cake, which there is a lot of in the book. I will tell you what the book is about first.

Lizzie Bradshaw. A student from the Lake District, forced to work away from home, who witnesses a terrible crime. But who will ultimately pay the price? Emma Taylor. A mother, a wife, and a woman with a dangerous secret. Can she keep her beloved family safely together? Stella Taylor. A disaffected teenager, determined to discover what her mother is hiding. But how far will she go to uncover the truth? And one man, powerful, manipulative and cunning, who controls all their destinies. 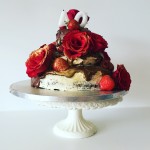 There are 25 different kinds of cake name-checked in My Mother’s Secret, from Daim cake bought over the counter in Ikea, to scones with cream and jam, and lavender shortbread, served with Earl Grey from Tyntesfield’s National Trust tea shop, to chocolate-orange brownies and courgette cake decorated with a cream-cheese frosting and scattered with rose petals and rosemary flowers, made by my protagonist, Emma Taylor.

‘The chocolate cake doesn’t rise, so Harry and I rescue it by soaking it with an espresso-rum syrup and layering it in tiers with salted-caramel butter cream.’
Emma Taylor

It’s an odd juxtaposition: cake and crime. Emma is a baker, working in Kate’s. Although she spends her days in what seems the most secure and seductively comforting of occupations – baking cakes and sourdough bread – Emma is anxious and nervous, hiding a terrible secret from her family and her friends. Whilst she rises around 4 a.m. to feed the yeast, her teenage daughter, Stella, is spying on her, determined to find out what her mother’s secret is. Meanwhile, a young student, Lizzie Bradshaw, out of her comfort zone in Leeds city centre, witnesses a shocking crime that will have repercussions for the rest of her life.

‘She doesn’t like alcohol in cakes. That’s Katie’s thing. And she isn’t into gluten-free or, you know, polenta. She doesn’t think it’s right for cake. Anyway, it’s what poor people eat.’ My dad winces, in spite of his best Dr Seuss face. ‘In developing countries like Mexico, I mean. You have to be middle-class to afford it here.’
Stella Taylor

The cakes – from the blackberry muffins, to the Black-forest gateau – are, of course, symbols of security, but in a thriller, nowhere, least of all the places where we live and work, are safe.
‘It sounds like something a pirate would eat.’
Paul Bradshaw

Whilst I was researching this novel, I had to delve into organised crime on the one hand, and on the other, hang out in a bakery (Hart’s Bakery in Bristol, which is the one Kate’s is based on) learning how to make croissants and discovering what on earth a friand is. Fortunately, I love baking anyhow so I found it a wonderful indulgence and a relief to write about cake in between the rather more chilling happenings in My Mother’s Secret.

‘She’d like a Victoria sponge with lots of cream and some fruit. Raspberries and jam. Something simple.’
He looks disappointed. I can see he wanted a statement of a cake. Like his love.
Stella Taylor

Unlike Emma, though, I don’t eat gluten and try not to consume sugar, so cake, in my real life, is an infrequent treat, usually made with polenta or gluten-free flour and sweetened with dates. Emma would not approve.

Zoe and Ollie Morley tried for years to have a baby and couldn’t. They turned to adoption and their dreams came true when they were approved to adopt a little girl from birth. They named her Evie.
Seven years later, the family has moved to Yorkshire and grown in number: a wonderful surprise in the form of baby Ben. As a working mum, it’s not easy for Zoe, but life is good.
But then Evie begins to receive letters and gifts.
The sender claims to be her birth father.
He has been looking for his daughter.
And now he is coming to take her back…

The Stolen Child starts with an excerpt from one of my favourite poems and had me hooked from the opening chapter.
Zoe and Ollie Morley adopted a baby girl and then a few years later had a son of their own. They moved back to Zoe’s home town of Ilkley where Ollie has a successful career as an accountant and Zoe is trying to build a career as an artist.
Evie has a few problems, some of which appear to be caused by her natural mother taking drugs whilst she was pregnant with her. So, life isn’t always easy for Zoe, Ollie is absent a lot with his work and she must deal with Evie’s issues on her own. But these are nothing compared to how hard life gets when Evie’s natural father contacts her.
I don’t recall ever feeling so tense when reading a novel before. Not only from the anxiety experienced by Zoe and Ollie but also the threat to other members of the family. I think I suspected everybody who featured, and as my options run out and I guessed who it was, it was all for the wrong reasons.
It wasn’t just the storyline that had me so gripped. There was also the description of Ilkley Moor which also has a major role in the novel. The power and remoteness that in the wrong weather could be dangerous. It is an area that I am now looking at going to later in the year. I would love to see what Zoe painted.
An excellent follow up to Bone by Bone, readers of that will not be disappointed.
You can buy the book here
With thanks to the publisher for the copy received.

Even my little pal enjoyed it… 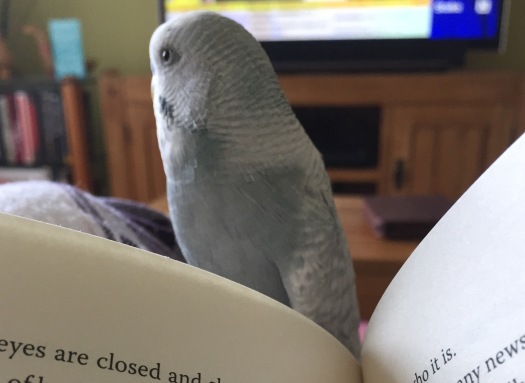 Today, it is my pleasure to welcome to my blog Liz from lizlovesbooks reviewing the brilliant novel Bone by Bone.

But nine-year-old Autumn is being bullied. Laura feels helpless.

Bone By Bone is both a top psychological thriller and an emotional and hard hitting look at the insidious nature of bullying – it is a bit of a page turner I read 3/4 of this in one sitting and it is scary and realistic – the realism making it more scary than if it were complete fantasy or even read as being slightly unlikely.

Autumn is being bullied at school, her mother tries to put a stop to it and ends up making it worse after one definitive and far reaching decision made in the spur of the moment.

The nature of this novel, in that it shows the slow downward spiral of a mother and daughter whom the system lets down, is extremely topical and very haunting. As they struggle to deal with knock after knock, you will be absolutely glued to the pages, in disbelief and horror at how quickly one seemingly small incident can escalate into a targeted campaign of fear. The actions of the school, of the bully, of his Dad, of the other parents, all cleverly interwoven into the underlying sense of unease will really hit home and Sanjida Kay has a keen eye for the small details that really matter when it comes to telling a story.

One of the things I thought was particularly intriguing about Bone By Bone was the way it looked at many facets, the ending may be unexpected but feels absolutely right and whilst bullying is, by its very nature, a most horrific thing, there are often multiple layers at play and this novel speaks to that very well.

Wonderful book that is published today in paperback

But nine-year-old daughter Autumn is being bullied. Laura feels helpless.

My review:
It is a long time since I read a full book in one day but this novel was impossible to put down for long. I think the reason was due to the subject matter, bullying.
It is told by both mother and daughters point of view. Autumn was trying her hardest to keep things from Laura but was understandably struggling. She didn’t agree with the way that Laura was dealing with it, feeling that it made it worse for…

But nine-year-old daughter Autumn is being bullied. Laura feels helpless.

My review:
It is a long time since I read a full book in one day but this novel was impossible to put down for long. I think the reason was due to the subject matter, bullying.
It is told by both mother and daughters point of view. Autumn was trying her hardest to keep things from Laura but was understandably struggling. She didn’t agree with the way that Laura was dealing with it, feeling that it made it worse for her. Laura knew that she had made a big mistake but guilt and fear made it difficult for her to ask anybody close to her for help. Levi did have his problems, these became more evident towards the end but it wasn’t just him doing the bullying. Other children and their parents were just as cruel. Laura was also being bullied although in a different way to Autumn. Her bully was ensuring that she would be isolated and helpless in every way.
I found it at times to be really intimidating. Laura and Autumn shouldn’t have had to go through what they did, but sadly it happens and the author has done a fantastic job of highlighting the situation that some families must be going through.

With thanks to the Corvus for the copy received.