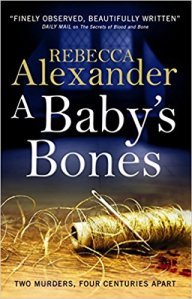 Today it is my pleasure to host a guest post from Rebecca Alexander who talks about how literary and film influenced her writing. But first I will tell you about the book. It is one that I can’t wait to read.

Archaeologist Sage Westfield has been called in to excavate a sixteenth-century well, and expects to find little more than soil and the odd piece of pottery. But the disturbing discovery of the bones of a woman and newborn baby make it clear that she has stumbled onto an historical crime scene, one that is interwoven with an unsettling local legend of witchcraft and unrequited love. Yet there is more to the case than a four-hundred-year-old mystery. The owners of a nearby cottage are convinced that it is haunted, and the local vicar is being plagued with abusive phone calls. Then a tragic death makes it all too clear that a modern murderer is at work…

There is always an overlap between writing history, with its snippets of information lost in ledgers and court documents, and wanting to write a historical fiction with realistic characters. Every writer tackles that overlap differently. Alison Weir, for example, strikes me as a writer who uses every bit of known information them lets imagination fill in the gaps. I find her books wonderfully researched, full of the tiny details of Tudor life. Philippa Gregory manages to convince me in a different way, the characters believable and the story in the foreground, the background authoritative without being too detailed. I enjoy both enormously, and both help me find my way in the morass of historical detail to trust in the story.

I’m a big fan of the 1580s for lots of reasons, and I’m not alone. Films from Shakespeare in Love to Elizabeth: The Golden Years show a glittering world of an England in a cultural renaissance. Ordinary people had seen their prosperity improve, religious freedom started to develop (at least in private) and our modern perspective on things like science and human rights started to evolve. It was also a time of more trading and travel around the world, importing silks and spices, sugar and new technologies. I love C. J. Sansom’s Shardlake mysteries, they are based earlier but reflect the turmoil that England was going through with the upheaval of the dissolution of the monasteries. But when writing the historical strand, my strongest influence came from books like the Giordano Bruno mysteries by S.J. Parris. Bruno is surrounded by many of the characters from my own books like John Dee (the sorcerer and astrologer) and his associate, Edward Kelley. I was also informed by the fascinating The Time Traveller’s Guide to Elizabethan England by Ian Mortimer, which is so entertaining I read it like a novel when I first found it.

Although I hadn’t read Elly Griffiths’ wonderful Ruth Galloway stories until after I had written A Baby’s Bones, I loved them. I enjoyed the slightly disorganised, strongly independent main character, and the wide range of archaeological puzzles she writes about. I have since read them all and they are wonderful at developing the main characters through the varied storylines and the crimes she investigates.

Writing historical fiction obviously involves reading a lot of research, some of whom tell their own stories. Many books from the era survive, and it’s possible to get lost in the research and struggle to find time to write the story. With A Baby’s Bones I found the story easier to write while wandering around Elizabethan houses, reading ‘receipt books’ like Catherine Tollemache’s and reading Philippa Gregory and Alison Weir’s books.