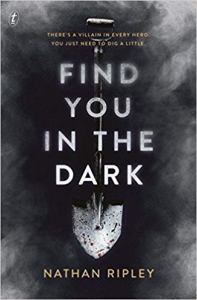 Martin Reese is an average guy who just happens to be obsessed with digging up the undiscovered remains of serial killer victims. For years, he has illegally bought and studied police files, using them to find missing bodies left behind by serial killers. His wife’s beloved sister vanished decades ago, her body never found, so Martin knows what it is like to live without closure. The anonymous tips have led the police to many grisly finds and the police department have dubbed him ‘The Finder.’

With thanks to Sophie Goodfellow for the copy received. Find You In The Dark is likened to both The Talented Mr Ripley and Dexter. Not having read or watched either I read this novel not knowing what to expect. But with it being published by Text Publishing I knew it would be a little different.
It is a slightly sinister read, Martin is intent on helping his wife get some closure by finding the body of her sister who disappeared before they met. Whilst he has failed with that he has helped other families. He does it by sifting through police statements for the mundane facts that the police decide are worthless. This helps him locate the bodies but the police are keen to know more about him. And alongside them is a killer.
I wouldn’t say that Martin was a character I liked. He was a successful businessman but he did have a worrying side to his personality, especially when he was younger. This is explained towards the end but it was still a little disturbing. I felt his marriage a little empty, but both him and his wife were devoted to their daughter Kylie, my favourite character out of the three.
The two officers trying to identify him and solve current murders are another strange couple. Sandra, especially, gives an outward image of being a hard cold person, sometimes rude but I think if there is a follow-up novel her softer side will be revealed. I have to admit I did have suspicions about her partner but they were incorrect.
Often fascinating, sometimes gory and totally original. I liked it a lot. Recommended.