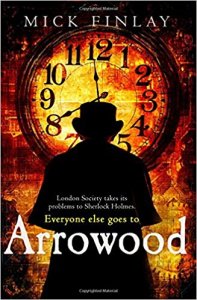 1895: London’s scared. A killer haunts the city’s streets. The poor are hungry; crime bosses are taking control; the police force stretched to breaking point.
While the rich turn to Sherlock Holmes, the celebrated private detective rarely visits the densely populated streets of South London, where the crimes are sleazier and the people are poorer.
In a dark corner of Southwark, victims turn to a man who despises Holmes, his wealthy clientele and his showy forensic approach to crime: Arrowood – self-taught psychologist, occasional drunkard and private investigator.
When a man mysteriously disappears and Arrowood’s best lead is viciously stabbed before his eyes, he and his sidekick Barnett face their toughest quest yet: to capture the head of the most notorious gang in London…

Arrowood, ‘the guvnor’ is a private investigator. He solves the cases that Sherlock Holmes wouldn’t be interested in. He is overweight, drinks heavily has no social skills and detests Sherlock Holmes. But despite his many faults he is loyal to those who work with him and his clients.
The narrative is told by his assistant Barnett. Barnett has suffered a personal loss that he hasn’t discussed with the guvnor and he regularly suffers physical abuse. Some of it from the guvnor but also from the police and the people they encounter in their investigations.
What appeared an easy case for the team proves increasingly baffling and dangerous. I just wanted to protect Neddy, as well as give him a bath. It was hard to work out who they could trust, everybody including the police seemed to have their own agenda.
The description of a life in poverty in the London slums was the best that I have read in a long time. Not only could I visualise it, I could also smell and even taste it. Very convincing and I would love to read more about Barnett’s experience of a slum existence.
I have said it before, about numerous books but this would make great television. 19th century crime fiction, in the same city as Sherlock Holmes but could be a completely different world.
With thanks to the publisher for the copy received via Netgalley.