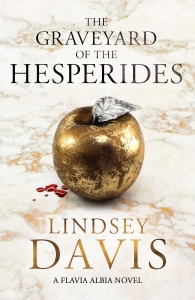 Today is the last day in a series of blogs featuring the author Lindsey Davis. The other posts have appeared here:

Reading Room With a View  Characterisation

Off the Shelf book review  Dialogue in historical fiction

At the beginning … when you started… there can’t have been much historical crime published. Let alone Roman Empire novels. And probably NOT with a female lead. So you wrote first person male books right up to the Flavia series. Yet you have always had strong female characters in your books. In the Falco books, Helena was a very independent woman from the moment she appeared in the first book. And now their adopted daughter Flavia Albia is the main character in the current series. How does it feel AT LAST to be writing as a woman? How much does this reflect your own life as an author – carving your own way, fighting battles and winning your own accolades ? Have you seen a change in publishing since you were first published? And how important is it that there continue to be such strong female leads in historical fiction?

I have to say I am deeply proud of inventing Falco, a man male readers want to be and female readers just want. (I have had letters meekly saying, I know he’s not real but I don’t suppose you could pass on his address…)
I believe Rome was packed with strong women, the ancestors of modern Italian ladies in their designer knitwear and with all their ladle-cracking power. Roman men and all those silly Victorian male academics think bed-hopping Messalina exemplifies the only kind of spirit there could be in female Rome, but not for nothing does Livia emerge as the most striking character in I, Claudius. There is ample evidence for Roman women who had jobs or owned property, and mothers played a very important role in bringing up children. I have always said I like the fact that, unlike Greeks, Roman men took their wives when they went out to dinner. They didn’t leave them behind in the women’s quarters, while they were entertained by a kind of flute-playing geisha girl.
I was brought up in a family of strong women on both sides. I went to an all girls’ school and a women-only college where it was assumed you could get wherever you wanted in life on talent. Of course it was a shock to find there were still elements of society that took a different view, which eventually led me to change career and become a writer. I bet I am still paid less than a male author doing the same stuff would be, but I can’t prove it. I genuinely believe that male historical novelists get more attention and a greater spend in marketing. My editor and my agent are men, so they gently try to dissuade me from this view – but in my gut I know it’s true. Crime writing is a very egalitarian genre in many ways however. I chose well in that respect.
It was hard to establish myself originally, at a time when historical novels were supposed to be ‘difficult’ and nobody at all was writing popular fiction about the Romans. But I believed you should be original and in the end it paid off. I suppose I give that quality to my main characters. I don’t know if I call myself a feminist, though I have indeed fought the battles – but for a true feminist the point is that gender shouldn’t make any difference. So I hope I treat the men the same as the women in my work. Albia is different from Falco. I am enjoying that, but otherwise, I don’t feel ‘At last!’ She’s good fun – but so was he. He was wonderful and challenging to write about – and so is she.