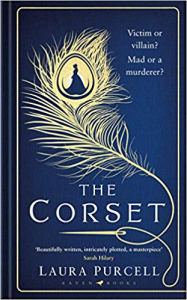 Is prisoner Ruth Butterham mad or a murderer? Victim or villain?

When Dorothea’s charitable work leads her to Oakgate Prison, she is delighted with the chance to explore her fascination with phrenology and test her hypothesis that the shape of a person’s skull can cast a light on their darkest crimes. But when she meets teenage seamstress Ruth, she is faced with another theory: that it is possible to kill with a needle and thread. For Ruth attributes her crimes to a supernatural power inherent in her stitches.

The story Ruth has to tell of her deadly creations – of bitterness and betrayal, of death and dresses – will shake Dorothea’s belief in rationality, and the power of redemption.

Can Ruth be trusted? Is she mad, or a murderer?

The Corset is a book that contains everything I love in fiction. Historical crime with a gothic twist. It also is convincing portrayal of how difficult it was for those who lived in poverty and the attitudes towards women at the time.
The two women concerned, Dorothea who is a wealthy and single socialite is fascinated by phrenology. She engages in good deeds at the women’s prison and uses the women there to learn more about it. Ruth is one of the young women who she meets and she is the one who intrigues her the most. Because she has been accused of and admitted to murder. The method that Ruth describes is different to every type of murder and as you read her story more is revealed.
I preferred Ruth’s story by a long way. Her tragic childhood and then her experiences at the hands of her employers were eye-opening. More so, because I felt that this was an accurate account of what it would have been like for many. Some of the things that happened to her I had to research myself. I had heard of them but not by the names they were known in the book.
It took me longer to warm to Dorothea. I did have sympathy but at times I found her selfish and condescending. But with her family background and the way she was controlled by her father it got easier to understand her. At times she seemed cold and a little bitter but then I could see a softer side as well. If she was allowed to do what interested her and be with who she wanted she would probably have been completely different.
At times it was creepy but not as much as I expected. Most of the time I thought Ruth’s ‘talent’ was in her head apart from certain events that did happen. I did guess at some of the eventual outcome but there was one part I didn’t see coming and it was one of the better finales in books I have read this year. That much, I read the last chapter again.
I read this book as serialised fiction via pigeonhole so I would like to thank both them and the publisher for the copy received.