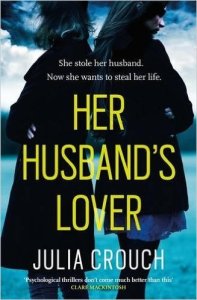 She stole her husband. Now she wants to take her life.
After the horrors of the past, Louisa Williams is desperate to make a clean start.
Her husband Sam is dead. Her children, too, are gone, victims of the car accident in which he died.
Sam said that she would never get away from him. That he would hound her to death if she tried to leave. Louisa never thought that he would want to harm their children though.
But then she never thought that he would betray her with a woman like Sophie.
And now Sophie is determined to take all that Louisa has left. She wants to destroy her reputation and to take what she thinks is owed her – the life she would have had if Sam had lived.
Her husband’s lover wants to take her life. The only question is will Louisa let her?

Her Husband’s Lover messed with my head. Two women, Louisa and Soph are linked by tragedy when Sam, Louisa’s husband and Soph’s lover dies after a high-speed car crash. Everything points to the accident being caused by Sam trying to kill Louisa so he can start a new life with Soph. Louisa attempts to rebuild her life under an assumed identity but Soph is after revenge and financial security for her daughter.
But this is not a book where you can even begin to assume anything. The only character who I could take as face value was Adam. When there had been a few chapters concerning the past I thought I knew the real story but I was increasingly horrified as I got nearer the end. One of the more eerie things about the book were the parts that were merely hinted at. The parts where I was left thinking about what might have happened.
I found it fascinating, very unsettling and impossible to put down. I don’t think that I have read anything like it before.
Julia Crouch is one of the authors who will be participating in tonight’s First Monday Crime. For anybody who can attend I’m sure it will be a great night. The details can be found here

With thanks to the publisher for the copy received via NetGalley.