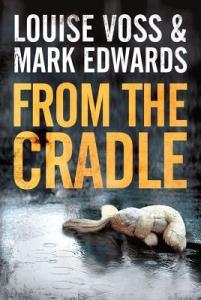 From the Cradle is intense right from the opening chapter. We often read a crime novel where a lead police officer has a troubled private life but l think that Patrick Lennon must be very near the top of the list for having the most difficult and unusual one.
Along with Carmella, Winkler and Suzanne he is trying to find three young missing children. Very much aware that time is against them they are desperate to find a link and reunite the children with their frantic parents. Not all the team are working together. Winkler is not a team player and resents Lennon being in charge of the investigation. Lennon himself is struggling to stay in control. His private life is very close to the investigation and at times he questions his ability.
I had no idea which way the tale was going to go. There were a lot of twists throughout, especially in the final third, maybe if I’ve any gripe, a few too many. But it didn’t ruin the book at all.
I would love to know how writing a book as a joint project works. I have read books by Mark Edwards before but I’ve never read any of the books that are also written by Louise Voss. I was quite impressed and I am happy that I have the second book in the Patrick Lennon series to read. Incidentally the second novel The Blissfully Dead is released today.

Whilst On Track for Murder was not really like I expected it to be I still found it enjoyable to read. I thought it would be a little sinister but instead I found myself reading a novel that combined crime, history and a big dash of romance.
I though the plot was different and after an initial surprise it went much the way I thought it would. I liked the main characters although I did find them unrealistic. I couldn’t imagine many women being like Abigail in the late 19th century.
I found the historical part of the novel to be the most interesting aspect, I liked reading about Perth and the railroad. I did cringe at times over the way that Bertrand was described but I should imagine that was the how his condition was seen at the time.
One of the criminals was really sinister and I could understand why Abigail felt the way she did about him from his first appearance.
On the whole I liked it and will keep a lookout for the author in the future.
With thanks to Kate for the copy received for review.

The Killing Kind was one of those unusual novels where I liked the killer. Mike is a killer, but is unusual in that he kills the contract killers who are paid to kill those who have crossed the people who have power. He is supposed to be dead and if another contract killer gets his way he soon will be.
Told by three very different viewpoints, that of Mike, Engelmann, the contract killer who has been hired to stop him and Charlie who works for the FBI. I did like Mike, he was very loyal to the people he cared about, mainly Lester his only friend and Evie the love of his life who along with many thought that he was dead. He doesn’t always like the victims he decides to help but if they agree to pay what he wants, he does what he needs to do with great precision.
He is being tracked by Engelmann who is a quite nasty, charming but lethal individual. There is nothing good to be said about him. Cold, ruthless and calculating but probably the most convincing out of all of them.
The FBI came across as slightly inept. Charlie, the lead, had guessed what was occurring but with her team were incapable of stopping it.
I did enjoy reading the novel, even though it was much more violent than I’m used to and at times I did feel like I was reading a movie script. It was easy to read though and I like the style of writing. I would be interested in reading the previous novels by Chris Holm.

Thanks to the publisher and the author for the copy received.

The Girl Who Wouldn’t Die was one of the many books that I’ve had on my kindle for a while and when I noticed that the second had been released I settled down to read.
George is a student at Cambridge University who is on placement in Amsterdam. When a student is murdered she is approached by Inspector van den Bergen to help identify the killer. When more murders are committed she realises how much danger the people she cares about and herself are in.
I enjoyed this novel very much. Amsterdam is somewhere I have always wanted to visit so it was interesting to read about the city itself. George is very likeable although she does have her faults. Very independent, a bit touchy and also a touch OCD but when you get to know about her past and her relationship with her mother you can understand why she is that way.
I also liked the Inspector, who delighted in frustrating his superior, and Ad although I did find him a bit self indulgent. I totally loathed Vin Fennemans . I won’t say why but it doesn’t take long for him to make a very unfavourable impression.
A fairly quick read, gruesome at times but a very good introduction to George and I’m looking forward to getting to know her better. I received my copy from netgalley so thanks to the publisher and the author for the copy received.
Since reading I have downloaded the first two and pre ordered the third in the series. 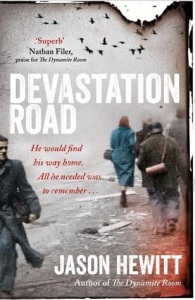 I knew that Devastation Road was always going to be a difficult book to read, but after reading the Dynamite Room and seeing a lot of glowing reviews I decided to go ahead and try and put aside any emotional thoughts.
It takes place in Czechoslovakia just at the end of the war. Owen wakes up in a field. His clothes don’t fit him and he has no recollection of why he is there or what year it is. He starts walking, trying not to be affected by the tragedy that he sees along the way. Over the course of his journey he is joined by Janek, a Czech teenager and Irena a young Polish Jew who has a baby. They meet many others on their journey. All who are hoping to get somewhere, anywhere where they can attempt to rebuild their lives.
As the journey progresses more is revealed about Owen, Janek and Irena and why they are in the situation that they are in. Janek, at times has a lot of anger and loses his temper often. Much of this is isn’t in English. Some you can work out but some you can’t, but this is what it would have been like for Owen and it worked well staying untranslated.
The last third of the novel was the most upsetting. Tales that were told by characters who were essential but only minor were very moving.
Devastation Road is easily one of the best books I have read, it will definitely be one of my top reads of 2015.

My Grandfather was a prisoner of war in XXb which was in Marienburg in Prussia. One of the last entries in his diary that he kept says
On March into Germany 10-1-45 to 26-4-45. Just one of many hundreds of refugees walking across Europe at this time.