The action swings from London to Sweden, and then back into the past, to Franco’s Spain, as Roy & Castells hunt a monstrous killer … in the lastest instalment of Johana Gustawsson’s award-winning series

Spain, 1938: The country is wracked by civil war, and as Valencia falls to Franco’s brutal dictatorship, Republican Therese witnesses the murders of her family. Captured and sent to the notorious Las Ventas women’s prison, Therese gives birth to a daughter who is forcibly taken from her.

Falkenberg, Sweden, 2016: A wealthy family is found savagely murdered in their luxurious home. Discovering that her parents have been slaughtered, Aliénor Lindbergh, a new recruit to the UK’s Scotland Yard, rushes back to Sweden and finds her hometown rocked by the massacre.

Profiler Emily Roy joins forces with Aliénor and soon finds herself on the trail of a monstrous and prolific killer. Little does she realise that this killer is about to change the life of her colleague, true-crime writer Alexis Castells. Joining forces once again, Roy and Castells’ investigation takes them from the Swedish fertility clinics of the present day back to the terror of Franco’s rule, and the horrifying events that took place in Spanish orphanages under its rule.

Terrifying, vivid and recounted at breakneck speed, Blood Song is not only a riveting thriller and an examination of corruption in the fertility industry, but a shocking reminder of the atrocities of Spain’s dictatorship, in the latest, stunning installment in the award-winning Roy & Castells series.

With thanks to the publisher for the copy received. When I read my first book by Johana Gustawsson it was one that contained facts that still upset me now. Her second book was just as good but didn’t have the same impact. Blood Song left me devastated by what I learned about the atrocities committed during Franco’s regime.

Once again she uses fact and fiction. It was the events concerning Teresa, Gordi and all her young friends that upset me. Much more than the fictional events in modern day. I find it very difficult to accept the levels of cruelty displayed but when reading the author notes and articles I found on google I felt it was an honest account. They were hard to read but when I saw how she combined the past and present I was stunned into silence, unable to think about anything apart from what I had just read.

It is powerful, it is a novel where none of the characters over shadow the story. It is a novel where I was left hoping that I would get to meet them all again, even Olofosson who I took a huge dislike to previously, I managed to have some sympathy for this time.

Whitechapel, 1888: London is bowed under Jack the Ripper’s reign of terror.
London, 2015: actress Julianne Bell is abducted in a case similar to the terrible Tower Hamlets murders of some ten years earlier, and harking back to the Ripper killings of a century before.
Falkenberg, Sweden, 2015: a woman’s body is found mutilated in a forest, her wounds identical to those of the Tower Hamlets victims. With the man arrested for the Tower Hamlets crimes already locked up, do the new killings mean he has a dangerous accomplice, or is a copy-cat serial killer on the loose?
Profiler Emily Roy and true-crime writer Alexis Castells again find themselves drawn into an intriguing case, with personal links that turn their world upside down. Following the highly acclaimed Block 46 and guaranteed to disturb and enthral, Keeper is a breathless thriller from the new queen of French Noir.

I couldn’t wait to see what Johana Gustawsson would write after the marvellous Block 46, so as soon as it landed on my kindle I started to read. I purposely didn’t read the blurb, I didn’t want to know too much about what I would be reading.

It takes place in London and Sweden in 2015 and also in 1888. This account is one that follows the same family into modern-day. The first few years of this was quite sad, reading how the events that occurred changed circumstances so much for Freda.

Anybody who is familiar with Jack the Ripper, the killer who terrified women, particularly prostitutes, in the late 1900s will enjoy this. Reading about the murders from the point of view of a woman who knew the victims was chilling. Johana has done a great job of humanising the victims, and the people who lived in the vicinity. Most of what I have read is from a policeman’s point of view or those from the upper classes, and they have never moved away from the view that the woman deserved to die because of their profession. That it didn’t matter, because it would never touch somebody like them. This is proved in the way that Freda is almost gleefully questioned by her employer.

I was pleased to see Emily and Alexis both reappear, they are very strong characters who have both suffered trauma in the past. More is revealed about what happened to Alexis, how it still affected her and how she tried to move on. Emily’s past is still hinted at but there are no real details. Other characters from the previous books also reappear. Some I was glad to see, some not, but I liked a newcomer Alienor very much.

I don’t think I have ever read a book that shows evil people in the way that Johana does. They are people who make you cold and at times nauseous. I couldn’t even begin to think what else that might be capable of. Each time I thought I had solved it I was proven wrong and the ending was one of the bigger surprises I have had when reading a crime novel.

A great follow-up, I was wondering how she would follow Block 46, because that book had a brilliant storyline but I wasn’t disappointed. Unique, compelling and it took over my life until I had finished it. First class crime fiction. 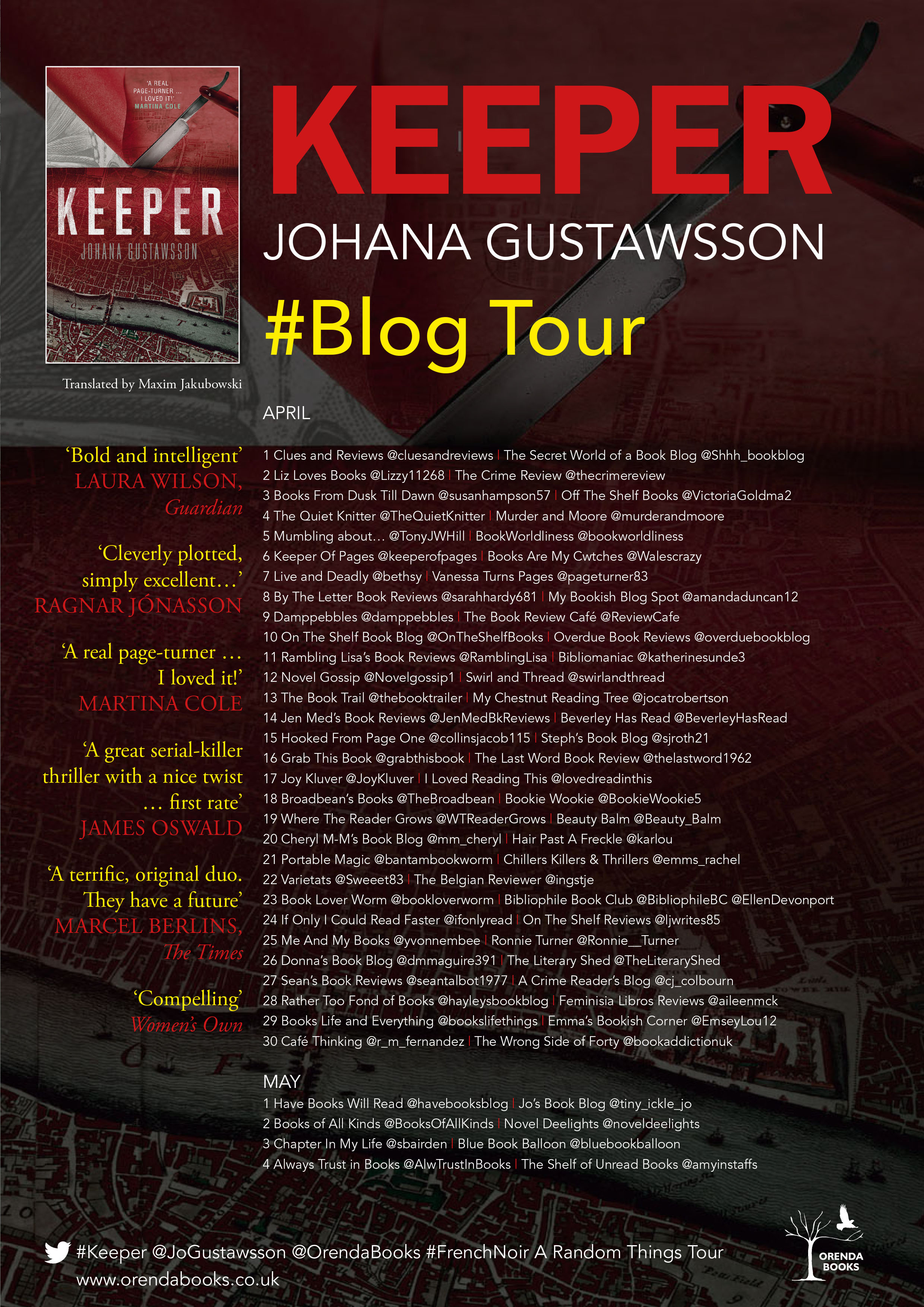 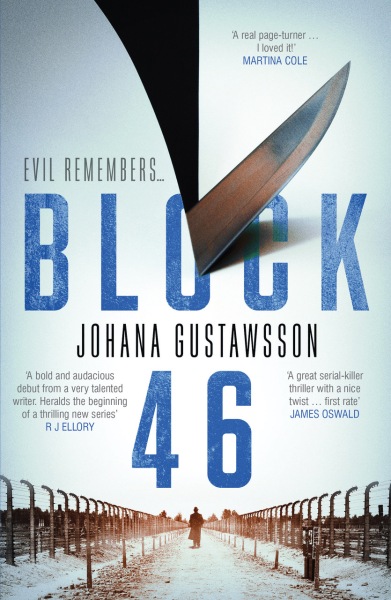 Evil remembers…
Falkenberg, Sweden. The mutilated body of talented young jewellery designer, Linnea Blix, is found in a snow-swept marina.
Hampstead Heath, London. The body of a young boy is discovered with similar wounds to Linnea’s.
Buchenwald Concentration Camp, 1944. In the midst of the hell of the Holocaust, Erich Hebner will do anything to see himself as a human again.
Are the two murders the work of a serial killer, and how are they connected to shocking events at Buchenwald?
Emily Roy, a profiler on loan to Scotland Yard from the Canadian Royal Mounted Police, joins up with Linnea’s friend, French true crime writer Alexis Castells, to investigate the puzzling case. They travel between Sweden and London, and then deep into the past, as a startling and terrifying connection comes to light.
Plumbing the darkness and the horrific evidence of the nature of evil, Block 46 is a multi-layered, sweeping and evocative thriller that heralds a stunning new voice in French Noir.

I had heard plenty about Block 46 prior to reading it. But nothing I had heard prepared me for what I would be reading. It is probably one of the most chilling and thought provoking books that I have ever read. One that can still make me feel edgy a week after finishing it.
It is mainly set in the modern day in England and Sweden where detectives from each country are joined by Alexis who was a close friend of the latest victim and Emily a profiler. They were all trying to find out who was responsible for murders in both countries.
But there are also parts of the novel that are set in Buchenwald in 1944/45. I have read a few novels that mention the Holocaust before but never before have I read anything that felt as personal and affected me as much as this. The cruelty and random acts of violence, the hunger, the stench, loneliness, and the desperation all had a huge impact on me. One section of the novel towards the end left me freezing cold and in tears. It also had me re-evaluating a section of the novel I had read earlier and how different events are when seen through another person’s eyes. As the novel progresses you see how the two stories connect but the author is very clever. At no point during the narration did I see or work out anything.
The relationship between Alexis and her parents was light relief during the novel even though they only appear briefly. I liked Alexis and Emily, at times they seemed to clash but I’m looking forward to seeing how their relationship progresses. I think there is a lot more to learn about Emily.
I found the story strong enough to work out well as a series but the Buchenwald storyline made this book so much more than a usual crime novel. This was an account that needed to be told and has catapulted it into my top ten list of books read. Not just in 2017 but my all-time top ten.
With thanks to the publisher for my copy received.

You can buy the book at Amazon and Waterstones