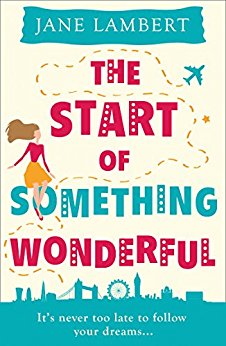 It’s never too late to follow your dreams…
Forty-year-old air stewardess, Emily Forsyth, thought she had everything a woman could wish for: a glamorous, jet-set lifestyle, a designer wardrobe and a dishy pilot boyfriend. Until he breaks up with her…
Catapulted into a mid-life crisis she wishes she’d had earlier, she decides to turn her life upside-down, quitting her job and instead beginning to chase her long-held dreams of becoming an actress!
Leaving the skies behind her, Emily heads for the bright lights of London’s West End – but is it too late to reach for the stars?

With thanks to the publisher for the copy received.
The Start of Something Wonderful is a lovely novel that shows it is never too late to follow a dream. When Emily’s boyfriend breaks up with her it makes her realise that the job she had wasn’t what she wanted, despite giving her an often glamorous lifestyle. She decides to train to become an actress and this novel shows how hard but how rewarding her journey was.
At first she struggled, taking acting jobs that could be humiliating but were also well-paying. And she also had to do jobs that would supplement her income. It is from one of these jobs that she finds somebody that she starts to have feelings for.
I found parts of the novel to be very amusing, especially her accounts of working in rep, a scene that involves a bicycle and her memories of the not as glam as you think life as an air stewardess.
I wanted her to find love again, and to be happy. Not to feel that she was letting people down and to give herself a break. And I wanted her dream to become a reality. I wasn’t sure if I felt happy or sad at the end. I’m sure there will be others who feel the same.
A heart warming novel for a miserable January day.