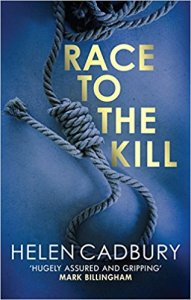 It is the middle of a long night shift for PC Sean Denton and his partner PC Gavin Wentworth when they are approached by a dishevelled-looking woman desperate that they follow her. She leads them to the old Chasebridge High School where they find the dead body of a Syrian refugee. The investigation which points to the neighbouring greyhound stadium finds Denton caught up in a world of immigration, drugs and sexual abuse, and one in which his private life becomes increasingly entwined.

I haven’t read the two previous books in the series, I wanted to, but as usual I ran out of time, fortunately I could read this novel as a standalone, not needing to know what had happened previously.
It takes place in Doncaster, not a town I’m familiar with but it was portrayed as a town that had seen happier times. Homelessness and social service are all prominent, as were those who stood to gain from abusing people who needed help most.
Sean Denton has made a success of his career in the police. He started as a PCSO and despite suffering from dyslexia managed to get a position as a police officer. He unintentionally uses other skills he possesses to do his job. He has a close relationship with his half-sister Chloe, a fractured relationship with his father and an often cold relationship with his girlfriend Lizzie.
It felt strange reading a novel where the lead character wasn’t a high-ranking detective. It was good to see a suspicious case from the beginning, before CID were involved. He was still a rookie, hard-working and eager to learn. Sometimes he was that eager he made mistakes, but he had a great relationship with his colleagues and they encouraged and helped him without belittling him. His relationship with Lizzie felt strained, I couldn’t really work out how they felt towards each other. One of the characters I got completely wrong, I’m usually pretty good at spotting things but this time I misread the entire situation.
I found it a great book to read, different to other crime novels with the main character being in uniform. I will have to read the earlier books to see how his character developed. I read it with a degree of poignancy, sadly due to Helen Cadbury passing away earlier this year this will be the last book in the series. I never knew her but she had many friends amongst authors and readers who were devastated by her death.