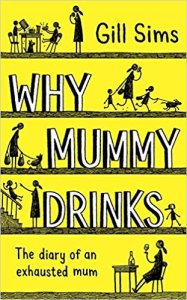 It is Mummy’s 39th birthday. She is staring down the barrel of a future of people asking if she wants to come to their advanced yoga classes, and polite book clubs where everyone claims to be tiddly after a glass of Pinot Grigio and says things like ‘Oooh gosh, are you having another glass?’
But Mummy does not want to go quietly into that good night of women with sensible haircuts who ‘live for their children’ and stand in the playground trying to trump each other with their offspring’s extracurricular activities and achievements, and boasting about their latest holidays.
Instead, she clutches a large glass of wine, muttering ‘FML’ over and over again. Until she remembers the gem of an idea she’s had…

Like many who have read this book I became aware of it by the author’s Facebook page Peter and Jane. It is a ‘diary’ of how she wishes her life as a mother of two young children would be and the reality of how difficult it is to raise a family and work without losing her sanity.
I don’t have children but this novel is believable, especially the daily battles to get them into school on time, dealing with squabbles and illnesses and what appears to be a lack of support from ‘gadget twat’. At times I was doubled up with laughing, not able to explain to anybody why I was laughing so much.
At times Ellen annoyed me, I didn’t enjoy as much the ‘middle class’ parts of the novel or some of the decisions she made. She did appear at times to be selfish and inconsiderate.
I did read the novel in a short period of time, it is easy to read, but I would probably have liked it a lot more if I had spread it out rather than read it all at once. I imagine if you are a mother of young children you would see a lot of similar situations to your own life in this book. Recommended.