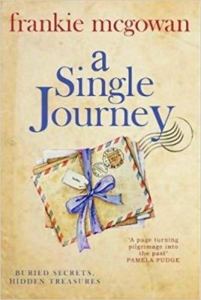 Harriet has begun to despair of her life.

With a failed relationship behind her, a business on the rocks and a flat that’s falling apart around her ears, she could really use some luck.

Elena Banbury, née Guseva, an elderly but imposing Russian woman who is Harriet’s neighbour and landlady, frequently entertains the punters at Harriet’s jewellery stall with tales of the palaces of St. Petersburg and the treasures of Fabergé. But Harriet sometimes feels, guiltily, that she could do without the endless errands that seem to fall to her as Elena’s friend.

Then, unexpectedly, when Elena dies, she leaves all her worldly goods to a grateful Harriet. In time, however, it becomes clear that others are shocked by Harriet’s good luck, too. Shocked… and very, very unhappy.

Challenged in court by Elena’s family who live in Berlin, Harriet is forced to give up her inheritance and long-dreamed-of plans for a new business, and start her life again. But with her reputation in tatters and the memory of Elena tainted, Harriet knows a great injustice has been done.

Against the advice of her friends, family and lawyers, Harriet sets off on her own, very singular journey to Berlin.

She knows she has to fight for justice. But, when she meets the scholarly, perceptive Neil, who generously tries to help Harriet in her mission, but who is struggling with a complicated marriage, she must also decide if she’ll fight for love, too.

A Single Journey is a compelling and lively story, combining colourful characters with a page-turning plot and romantic highs and lows.

With thanks to the publisher for the copy received. A Single Journey was a break from my usual choice of crime fiction and it was a book that I was glad to read. It did take me a while to get into, reading about Harriet being accused of taking advantage of an elderly woman and pushing her friends away wasn’t easy. But when she found out that she could do more, and started to discover more about Elena I was enjoying it much more. Especially after she arrived in Berlin.
There are small parts of the novel that were set in the past. Whilst not as many as I expected they did have an impact. More so when you knew how the story developed and the way that modern-day Germany coped with the events of WW2. I don’t want to say too much about this because of storyline spoilers but it is part of the storyline that I have thought about often since finishing.
I loved some of the characters, Bebe and Neil especially for their outlook on life, their willingness to help, their stubbornness and with Neil his obsession with being ill.
Many of the scenes I could easily visualise, the colours in the market that was struggling for business and both sides of Berlin, the affluent and the very run down areas.
It’s a novel that shows how you can rebuild your life, that it easy to wallow in self-pity but that helping others who are worse off is a huge reward.