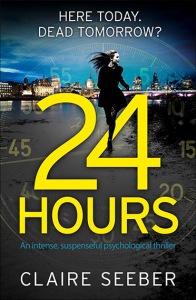 But it was meant to be me.

Now I have 24 hours to find my daughter.

Before he finds out I’m still alive.

24 Hours is a fast-paced, intelligent psychological thriller that will leave you breathless.

If you like a book with plenty of twists you will find plenty of them in this novel. I was pretty much addicted straight away and there was only one section where it went a little slower. It didn’t stop me enjoying it though, it was just a little less frantic.
To say Laurie was a bit of a mess would be an understatement, a counsellor who could do with listening to her own advice. Separated from an abusive husband who still controlled her and she liked another man who was either a liar or his ex wife was.Just as I thought she would have a little luck something would happen and she would end up in more of a predicament. Most of the characters who featured could have been responsible for what happened, I had no idea at all who it could be.
The chapters alternated between ‘then and now’. I liked both equally and was glad that they were only short so I could see what happened next in just a couple of pages.
It’s easily a book that could be read in one sitting, although I read it over a few days.

With thanks to the publisher for the copy received for review.