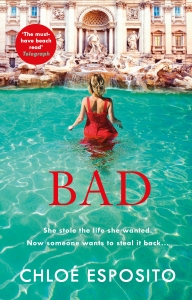 She stole the life she wanted. Now someone wants to steal it back . . .

Alvie Knightly may be waking up in the Ritz, but her life is no bed of roses.

Firstly, she has the mother of all hangovers.

Secondly, her beautiful, spoiled twin sister Beth has just been found dead in Sicily – and the police want Alvie for questioning.

And thirdly, Alvie’s hot new boyfriend has vanished with every penny of the millions they stole from Beth.

But he picked the wrong girl to mess with.

Alvie will pursue her ex to Rome in a game of cat and mouse that only one of them can survive.

But can Alvie get revenge before her crimes catch up with her?

With thanks to the publisher for the copy received. I’m not entirely sure what I have just read. I don’t know whether it is all just a dream that Alvie was having or if it was a warped reality. Whatever it is, it’s the most bonkers book I have read for a long time.
I hadn’t read Mad, book one in the series, but anything I missed was covered in the first few pages. It would probably have helped if I had, then at least I would have been aware of what Alvie was like. Her thought and actions at time were bizarre.
There were times I couldn’t read for laughing, there are images in my head that involve two prominent UK politicians that I really need to ‘unsee’. And some of the scenes that involved Mavis also made me smile.
Alongside our accidental murderess and the chaos that is Alvie’s life is a travelogue. Chloé Espisito shows the beauty of Italy,even if it only its more affluent areas.