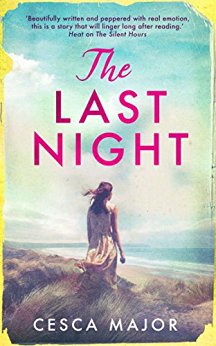 In a quiet coastal village, Irina spends her days restoring furniture, passing the time in peace and hiding away from the world. A family secret, long held and never discussed, casts a dark shadow and Irina chooses to withdraw into her work. When an antique bureau is sent to her workshop, the owner anonymous, Irina senses a history to the object that makes her uneasy. As Irina begins to investigate the origins of the piece, she unearths the secrets it holds within…
Decades earlier in the 1950s, another young woman kept secrets. Her name was Abigail. Over the course of one summer, she fell in love, and dreamed of the future. But Abigail could not know that a catastrophe loomed, and this event would change the course of many lives for ever…

The Last Night was a novel that arrived unexpectedly but I liked the look of it straight away. I enjoy fiction that is told by several different narrators across different time zones. In this case, it was Abigail, Mary and Richard in 1952 and Irina in 2016.
Abigail has recently lost her mother and decides to leave her home town to live with her married sister in Lynmouth. She falls in love with the area, has very strong feelings for Richard but misses her best friend Mary and feels very uncomfortable with her new living arrangements.
Irina is a furniture restorer who has been sent a bureau to work on by a client she has done work for in the past. She has had her problems and has facial scarring that she feels very conscious of. She also has suffered a loss in her childhood that she refuses to discuss. She has a strong sense of unease regarding the bureau. Unexplained events happen when she is near it, and when she finds items that have been hidden the fear increases.
Sometimes when reading a novel that is told by different narrators/ time zones there is a weaker story. But there is no problem here, I liked both equally and the chapters that featured Mary and Richard added to the tale. Neither of them aware of what was troubling Abigail but wanting to help.
Both stories had levels of intimidation, the ghostly occurrences were just enough to be believable and the situation that Abigail was in was very intense and worrying. When the events of the last night were revealed and its aftermath it was devastating. That this novel is loosely based on a true event was quite upsetting, more so when I looked at old photographs after finishing it.
Definitely one of my favorite novels of 2016 I would like to thank the publisher for the copy received.

The Last Night will be published on 3rd November. to preorder click here