Today, I am doing something slightly different by revealing the synopsis for Caroline England’s new novel called Betray Her. There is no cover at the moment but watch this space.

Best friends forever.That’s the pact you made.You’d do anything for her.And you have.But she’s always had it all.If you could take it for yourself . . . would you?The novel is called BETRAY HER and it’s due for release in ebook on 14th March and in trade paperback on 24 September. The Amazon link is https://amzn.to/2Q9CbnG

Whilst you have to wait to get your hands on her new book there is a collection of short stories available for download. It’s called WATCHING HORSEPATS FEED THE ROSES. The link for that is https://amzn.to/2T3dWK9 and it is best described by its tagline, which is 12 Sharp and Sweetly Twisted Tales! She will be publishing another collection in the spring.

Born Yorkshire lass, Caroline studied Law at the University of Manchester and stayed over the border. Caroline was a divorce and professional indemnity lawyer and instigated her jottings when she deserted the law to bring up her three lovely daughters. Caroline has had short stories and poems published in a variety of literary publications and anthologies.
Her debut novel, Beneath the Skin, known also as The Wife’s Secret, was published by Avon HarperCollins on 5 October 2017. Her second novel, My Husband’s Lies, followed on 17 May 2018 and became a Kindle top ten bestseller. Her two-book deal with Piatkus of Little, Brown Book Group, includes a “dark” psychological thriller called Betray Her, which will publish in March 2019.

Today it is my pleasure to show you an extract from My Husband’s Lies by Caroline England. I will let you see what the book is about first.

Do you really know your friends?

On the afternoon of Nick and Lisa’s wedding, their close friend is found poised on a hotel window ledge, ready to jump.

As the shock hits their friendship group, they soon realise that none of them are being as honest with themselves – or with each other – as they think.

And there are secrets lurking that could destroy everything.

Finally arriving in the drenched car park, Nick spots Dan and Will’s cars parked together like kippers. Feeling a warm spread of comfort, he jumps from the car, flicks open an umbrella and opens his mum’s door. She slips out, neat and trim in her hat and tailored suit, and smiles reassuringly. Patrick does the same for their scowling father, but at a much slower pace. Harry’s hip replacement was a complete success according to the consultant, but he still struggles. ‘He’s got a new hip. He needs to use it,’ his mum says. But only in private.
The rain splattering his polished shoes, Nick walks briskly up the path towards the stone and cream church.
‘Are you nervous, love?’ his mum asks, tightly holding his arm. ‘Big day. Your big day. Exciting but nerve-wracking at the same time.’ At the door she pats the rain from his shoulders and kisses his cheek. ‘You look very handsome. You make me so proud.’
Similar to the words she used on his first day at school, he tries to answer with a mildly sardonic quip, but finds that he can’t. It’s as though the soft, steady smell of her perfume is stuck in his throat. Instead he focuses on the door, pushing it hard and almost colliding with the priest.
‘Sorry,’ he says. ‘Nearly knocked you over, Father.’
Father Garry turns. ‘Just wiping my feet.’ He shakes Nick’s hand and Patrick’s, then his mother and father’s. ‘Welcome … Welcome all,’ he says, his eyes pale and rheumy.
Glancing at his mum, he’s not sure what to say. Father Garry has clearly forgotten their names, though the tense wedding run-through was only last night. 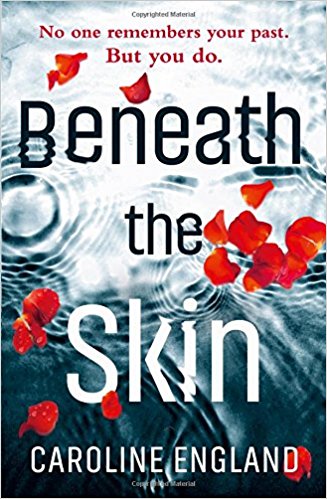 Three women. Three secrets.
Antonia is beautiful and happily married. Her life is perfect. So why does she hurt herself when nobody’s watching?
Sophie is witty, smart and married to the best-looking man in town. She likes a drink, but who doesn’t?
Olivia is pretending to be a happy wife and mother. But her secret could tear her family apart.
Their lies start small, they always do. But if they don’t watch out, the consequences will be deadly.

With thanks to the publisher for the copy received.
I had Beneath The Skin on my kindle for a while and when I saw that there was a new book out I decided it would be the right time to read it.
There couldn’t be a more apt title for this book because nearly every character in it didn’t show the true side to their personalities. There are four couples, all different in most cases, apart from that they all have secrets. Most of the people in the novel are unpleasant a lot of the time, although you did see a better side to them occasionally. That is with the exception of Sami and Sophie, two characters who I just hated with a passion. There is a saying, that them being together wouldn’t ruin another couple and it is accurate for these two people. Sophie is a nightmare, spoilt, arrogant, lazy and bullying pretty much sums her up. Antonia is her victim much of the time, and apart from Rupert, she was the only one who I had any sympathy and liking for.
I didn’t really regard it is a psychological thriller, the secret isn’t revealed until the end of the novel. And by that time, for me, it was of no consequence. What was happening in present time was more fascinating. I had a feeling that the ending was left slightly open. There is definitely potential for another book featuring many of the same characters. Or it could have been left for the reader to make up their own mind. each way works perfectly.

Today, I am delighted to share with you an extract from Caroline England’s debut novel. I have the book on my kindle and hope to read very soon.

Antonia, Antonia. My name is Antonia.’
It’s been her name for many years. But sometimes, like tonight, she forgets.
Antonia has a secret. A secret so dark and so deep that she can barely admit it to herself. Instead, she treats herself to Friday night sessions of self-harm while her husband David is at the pub, and her best friend Sophie is drinking too much wine a few doors down.
Nobody close to her knows the truth about what the teenage Antonia saw all those years ago. No-one, that is, except her mother. But Candy is in a care home now, her mind too addled to remember the truth. Antonia is safe. Isn’t she?
The lies start small. They always do. But when the tightly woven story you’ve told yourself begins to unravel, the truth threatens to come to the surface. And then what’s going to happen?

‘How’s Antonia?’
‘Fine, she’s fine,’ David answers, glancing towards the bar, the sparkle back in his bright blue eyes. ‘At home with a DVD and guacamole. Jennifer Aniston’s my bet. Actually Mikey, I wanted to ask you. Her birthday’s coming up and I want to buy her something special, maybe something different for a change. Got any ideas? What would you buy Olivia?’
Mike scratches his chin, still smooth from its second shave of the day. He laughs. ‘You mean, what do you buy the woman who has everything?’
‘He treats her like a bloody doll,’ his wife Olivia often remarks, spot on as ever. The statement reminds him of a cardboard dolly set his sister was given one Christmas. She asked him to play, and despite his desire to try out his new bicycle in the biting Irish winter outside, he knelt beside her and joined in the game at the warm kitchen table, detaching the paper outfits from the booklet, the dresses, the hats, the scarves and the shoes, then dressing the doll in different designs for each season of the year.
‘I’m serious, Mikey.’ David interrupts his thoughts. ‘What would you buy Olivia?’
Mike takes a swig of his beer, then wipes the rim of the glass with his thumb. David’s assumption that their respective wives fall into any remotely similar category makes him smile to himself.
‘Vain and vacant. The sort of woman I can’t stand,’ Olivia said of Antonia after meeting her for the first time at one of David and Antonia’s dinner parties. ‘But as it happens, she’s nice and I like her, which is really annoying.’
So what would he buy Olivia? What had he bought her last time? Mike can’t remember, probably something she’d asked for, but then they don’t make a fuss of their own birthdays, preferring to concentrate on their two lovely girls.
And there it is: like Winston Churchill’s dog, his own black dog of despair, bounding back into the pub and sitting by him. Close, comfortable and devastating. He hears his own voice not long after it happened, trying for rationality: ‘I didn’t even know him. It could have been so much worse.’
There are times when Mike wonders if he’s spoken aloud, made his words to the dog public. For a moment he’s forgotten the question, but he’s saved from an answer; David has turned towards the door.
‘What bloody time do you call this?’ he bellows, standing up and gesticulating towards the bar. Mike looks at his watch. It’s getting on for last orders but Sami Richards grins and shrugs, holding out his palms in a dismissively apologetic gesture. Elegant and handsome, he strolls past the Friday regulars clustered at the bar, the turned-up collar of his black leather jacket matching the sheen of his skin.
‘Why does he always look as though he’s walked off the page of a fucking magazine?’ David says, a little too aggressively, as he turns back towards Mike. He knocks back his pint, ready to get in more drinks.