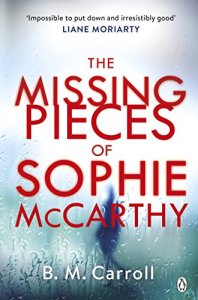 She’s the victim. But is she innocent?

Sophie McCarthy is known for her determination, ambition and brilliance at work. She’s tough, but only because she wants to get the best out of people.

Aidan Ryan is strong, honourable, and a family man. He’s tough too; the army requires it.

When these two strangers are brought together in a devastating incident, Sophie’s life is left in ruins. Her family wants to see Aidan pay for what he did.

Aidan’s prepared to sacrifice everything – including his marriage and his child – to fix the mess he’s made.

But some things can’t be fixed, and Sophie is not at all what she first appeared

With thanks to the publisher for the copy received. There were a few things that surprised me about this novel. One of them was how many narrators there were. I’m used to just a couple, but in this novel there were plenty. All connected in some way and all reacting to the situation in different ways. This could have been confusing but it worked very well. Especially as the novel progressed.
Sophie was a difficult person to have any liking for. I did feel sympathy for her initially but as more was revealed about her character, the way she treated people and the way she was idolised by her father I liked her less. Her father was a character who was that obsessed with her it was creepy. I had a lot of sympathy for the other members in her family.
I liked Jasmin a lot, when I first read about her difficulties sleeping it was from her parents point of view, but the heartbreak and desperation felt by Jasmin was one of the more upsetting parts to the novel. Hannah was another who I liked reading about. How she needed to support her boys, stand up to nasty neighbours and an even nastier boss.