How do you catch a killer who leaves no trace?

A victim killed with a single, precise stab to the heart appears at first glance to be a robbery gone wrong. A caring, upstanding social worker lost to a senseless act of violence. But for Detective Kim Stone, something doesn’t add up.

When a local drug addict is found murdered with an identical wound, Kim knows instinctively that she is dealing with the same killer. But with nothing to link the two victims except the cold, calculated nature of their death, this could be her most difficult case yet.

Desperate to catch the twisted individual, Kim’s focus on the case is threatened when she receives a chilling letter from Dr Alex Thorne, the sociopath who Kim put behind bars. And this time, Alex is determined to hit where it hurts most, bringing Kim face-to-face with the woman responsible for the death of Kim’s little brother – her own mother.

As the body count increases, Kim and her team unravel a web of dark secrets, bringing them closer to the killer. But one of their own could be in mortal danger. Only this time, Kim might not be strong enough to save them…

The Kim Stone series is one of my favourites, but it is also one ( of many) that I have not kept up with. I am determined to catch up this year and what a cracker to start with. I’m surprised I have any nails left!

There are two threads in the novel. A woman who is found dead in her car, swiftly followed by another death is the case that Kim and her team are trying to solve but the other, far more intimidating story is the threat that Kim faces from her past.

That is Alexandra Thorne, in prison, but still able to manipulate and control just for enjoyment. I don’t think that I have come across a character quite as scary as her. It wasn’t just Kim, there were also inmates and prison officers who suffered due to her actions. I was aching for someone to stand up to her, if only to wipe the smile from  her face when she got what she wanted time and time again.

The author does an excellent job of showing the differing personalities in Kim’s team. You get to see strengths but also their faults. I include Kim, whose main weakness was allowing Alexandra to get to her, but it would take a very strong person who could cope with what she had to face. I also had appreciation for the way mistakes were acknowledged and solved as a team. There was no room for blame.

This is a series that I have enjoyed since it began and I am looking forward to starting my catch up.

The girl’s smashed-in face stared unseeing up to the blue sky, soil spilling out of her mouth. A hundred flies hovered above the bloodied mess.

Westerley research facility is not for the faint-hearted. A ‘body farm’ investigating human decomposition, its inhabitants are corpses in various states of decay. But when Detective Kim Stone and her team discover the fresh body of a young woman, it seems a killer has discovered the perfect cover to bury their crime.

Then a second girl is attacked and left for dead, her body drugged and mouth filled with soil. It’s clear to Stone and the team that a serial killer is at work – but just how many bodies will they uncover? And who is next?

As local reporter, Tracy Frost, disappears, the stakes are raised. The past seems to hold the key to the killer’s secrets – but can Kim uncover the truth before a twisted, damaged mind claims another victim …?

Play Dead is a welcome return for one of my favourite detectives, Kim Stone. It’s gorier than the previous three books and I would recommend not reading the beginning whilst eating or cooking. I was caught out twice! Plenty of dead bodies feature, some are already present when Kim is sent to Westerley as a ‘reward’ but there is also one that is unexplained and Kim and her team have to investigate. Tracy Frost is still a thorn in Kim’s side but during one of their usual spats she mentions a cold case that Kim might be able to look at. Despite initial misgivings she has a closer look and soon ends up trying to solve both.
The tale is told by various points of view, Kim’s, Tracy’s and the unknown killer. The killer’s tale is told by flashbacks and it’s hard not to feel sympathetic. With quite a bit of the storyline focusing on Tracy I got to like and understand her a bit more. Still annoying, but she was a little more approachable.
One of the reasons I like this series so much is because all of the team are normal people. They all have lives away from the job, all have faults and all make mistakes. Kim more than anybody else. As the series has progressed she seems more willing to open up to people and not keep them at a distance. I would love her to allow somebody to get close to her emotionally
I did work out part of it but not everything. The full reasons why the killings were happening were quite sad and shows how the past can affect later life. I’m looking forward to the next in the series.

Lost Girls is the third book in the series that features detective Kim Stone. I have read them all and this is the one that has made me feel more anxious than any of the others.
Two young girls are kidnapped. It has happened before and was handled by another team. Tragically in that case only one girl came home. Kim is determined that this wouldn’t happen again. She feels under more pressure because one of the mothers has asked for her to lead the investigation, they knew each other when they were in foster care.
You are aware who the kidnappers are and they are very unpleasant. But you are not made aware of everything, an unidentified third person is hinted at but nothing more. The journalist is a thorn in Kim’s side. The team have been ordered to keep the current kidnapping case away from the press but she is determined to get a story regardless of the consequences. But she did show that she was capable of humanity regarding another situation.
I loved the relationship between Kim and Matt, the negotiator who has been been brought in to try and get the girls home. I really hope that he is a character who appears in future novels. One of the strongest points of this series is the relationship between the team. Even though she isn’t the easiest person to work for they are devoted to her.
I have always enjoyed a detective series, seeing the characters and relationships develop. Sometimes I’ve not been keen on the odd book and sometimes I have a break from a series and return to it after a few years. This is a series that I am now hooked on and I’m really looking forward to the next book. 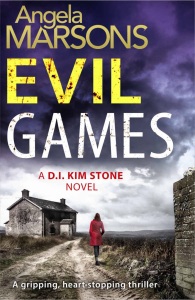 Evil Games, the second novel in the Kim Stone series doesn’t disappoint. Two different stories feature in this book, both of which are very disturbing. I can say without giving anything away that Alex, the main character in one of the investigations is a nasty piece of work. This is evident from the start of the book and there is nothing good to say about her.
It was good to get to know more about Kim and her team. More of her past was revealed mainly due to Alex’s manipulation but it showed how it has made her such a strong character. One with a caring side as was proven with her new little friend.
I am really looking forward to the next in the series. I hope that I don’t have long to wait.
With thanks to the publisher and the author for the copy via netgalley.