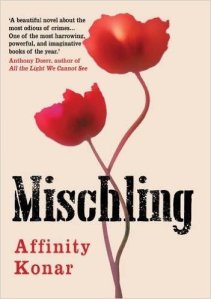 It’s 1944 when the twin sisters arrive at Auschwitz with their mother and grandfather. In their benighted new world, Pearl and Stasha Zagorski take refuge in their identical natures, comforting themselves with the private language and shared games of their childhood. As part of the experimental population of twins known as Mengele’s Zoo, the girls experience privileges and horrors unknown to others, and they find themselves changed, stripped of the personalities they once shared, their identities altered by the burdens of guilt and pain. That winter, at a concert orchestrated by Mengele, Pearl disappears. Stasha grieves for her twin, but clings to the possibility that Pearl remains alive. When the camp is liberated by the Red Army, she and her companion Feliks – a boy bent on vengeance for his own lost twin – travel through Poland’s devastation. Undeterred by injury, starvation, or the chaos around them, motivated by equal parts danger and hope, they encounter hostile villagers, Jewish resistance fighters, and fellow refugees, their quest enabled by the notion that Mengele may be captured and brought to justice within the ruins of the Warsaw Zoo. As the young survivors discover what has become of the world, they must try to imagine a future within it.

When I first started reading Mischling I was intrigued by the title but had no idea what it meant. When I found out, it was the first of many times that I felt chilled reading this novel. Pearl and Stasha are twins and have recently arrived at Aushcwitz and soon realise the level of danger that they are all in. Very soon after arrival they have the attention of Josef Mengele. Stasha feels that she has the power and will to charm him into getting better treatment for her mother and grandfather. She believes his promises and outwardly accepts all what he does. But in her mind, she only wants revenge.
There is so much about the novel that is devastating. The images created of suffering loss and death were very vivid. But the strength, loyalty and willpower shown by the twins and their friends was humbling. I had to keep reminding myself that the twins were only twelve years old and their friends not much older.
The narrative switches between Pearl and Stasha, both say how they suffer under Mengele, Elma a nurse and Taube a guard. Mengele was evil, I was aware of that prior to reading but the venom displayed by Elma and Taube was just as upsetting. Especially Taube, just as I thought things would be ok. But then there were others, who had no choice but to do what they were told and really struggled coping with their deeds.
Whilst both narratives were fascinating it was Pearl’s account that I preferred. There was part of her story that left me distraught and that image will stay with me for a while. There was a lot to get upset about in the novel but the strength of character, will and loyalty made it much easier to read. It gave a sense of hope that there could be a future for all the ones who suffered.
There will be some who believe that novels like this shouldn’t be written but my opinion is that they need to be. I believe that we are heading into a situation that nobody will remember or be aware of what happened during this time. Affinity Konar was inspired by the twin girls Eva and Miriam Mozes who both survived Mengele’s experiments.
A desperately sad novel that was also full of love and hope.
With thanks to the publisher for the copy received.