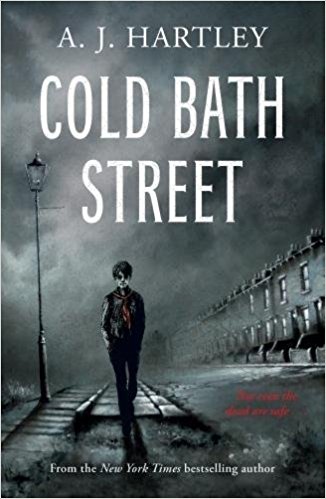 Preston Oldcorn is in a desolate void between life and death. In order to save his soul he must brave his greatest fear – Cold Bath Street. A gothic thriller – think Hunger Games crossed with Artemis Fowl – that will keep you gripped to the end. Stunning black and white illustrations throughout.

With thanks to the publisher for the copy received. Cold Bath Street is a YA ghost story that is partly based on some of the myths and legends concerning Preston in Lancashire. The lead character, also called Preston dies suddenly near his home after a scout meeting in 1978. For the duration of the novel he is in a strange afterlife described as ‘merely dead’. Initially he can’t see or talk to anybody who is still alive or  anybody who has moved on to ‘sincerely dead’.But after a period of time he trains himself to do this and uses his skill to help others who are like him get peace.
I found it a fascinating read, partly because it is local but also so because it is a brilliant story that I have never read anything like before. Preston’s determination to help others is his way of making up for his perceived failings when he was alive. I found this is a little upsetting at times, and struggle to say why, when all he was doing was good. There was one part, especially, when he did something that was personal to him and emphasised what a lovely person he was. I loved the way that the shyness and apprehension that was evident in his life diminished a lot when he died and was replaced by a gutsy determination to find answers and help others.
I hope that Cold Bath Street gets the recognition that it deserves. It will probably do well locally, I think it has had three print runs, and I hope it has many more. There is an event in July, details can be found https://nyalitfest.wordpress.com/

We have lived in Preston for years and it was only when the Guild Wheel opened in 2012 that we became aware that there used to be a railway line between Preston and Longridge. A very short part of the railway / now footpath was part of it. Which considering we live less than 1/4 of a mile away from one of the old stations  is pretty poor. Roughly around the same time there were articles on a local news blog about the railway line and accounts of people managing to get access to the Miley Tunnel (they are braver than me), and discussing which parts were still used daily. All we knew prior to this had been by seeing framed photos and newspaper articles that we had seen on the walls in The Plough.
We walk regularly from Gammull Lane (Ribbleton Station) down to the leisure centre where you have to leave the path. With this book being published we decided to try and get further. From there you can only walk alongside it,  but you can see some of the last remaining pieces of the track.

Eventually after a few detours  we arrived at Cold Bath Street. But everywhere is over grown and you can’t see any evidence of a railway line. We did this a few weeks ago and was disappointed at the lack of information available en route for such an important part of local history. There is nothing about the railway line, the old bath or the local legends. All of these are mentioned in the novel. If it wasn’t for this book and the local history books that the author mentions everything would be forgotten. Shame on you Preston City Council!
It is a lovely walk that could be made more special with a bit more knowledge.