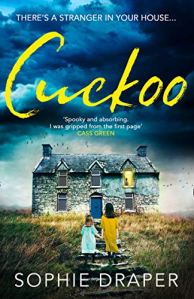 There’s a stranger in your house…

When her stepmother dies unexpectedly, Caro returns to her childhood home in Derbyshire. She hadn’t seen Elizabeth in years, but the remote farmhouse offers refuge from a bad relationship, and a chance to start again.

But going through Elizabeth’s belongings unearths memories Caro would rather stay buried. In particular, the story her stepmother would tell her, about two little girls and the terrible thing they do.

As heavy snow traps Caro in the village, where her neighbours stare and whisper, Caro is forced to question why Elizabeth hated her so much, and what she was hiding. But does she really want to uncover the truth?

Cuckoo was a novel that had me feeling increasingly uneasy as I read it. At the beginning when Caro arrives at her childhood home I thought she was just a little paranoid, exhausted and unsettled after spending so long away.
She is an illustrator and has a commission to provide drawings for a book of fairy tales. But these tales are not ones that you would feel happy a child reading. I remember fairy tales as being slightly fluffy with only a slight threat in the background. These  tales are how they would have been without the true threat removed. They were not tales you would like to read in an old house with its creaks and isolation. Especially when you can also see the images that Caro has created.
Along with increasing unease there were the twists. By the end I was feeling completely duped by everything I had read and wanted to reread parts to see if I had missed anything. I did, I hadn’t. I was just cleverly misled.
Not many of the main characters are very likeable. They were brittle, defensive and unfriendly. It was one of the lesser characters I did like more than than anybody else.
It’s a great book that I read mainly in one sitting on a glum December day. Sat in my nice warm home that had no unexplained noises, empty rooms full of unwanted memories or threats from the past and the present.