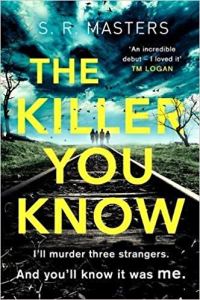 Summer 1997. When Will jokes about becoming a serial killer, his friends just laugh it off. But Adeline can’t help but feel there’s something darker lurking behind his words.

Winter 2015: Years later, Adeline returns to Blythe for a reunion of the old gang – except Will doesn’t show up. Reminiscing about old times, they look up the details of his supposed murder spree. But the mood soon changes when they discover two recent deaths that match.

As the group attempts to track Will down, they realise that he is playing a sinister game that harks back to one they used to play as kids. Only this time there are lives at stake . . .

Five Friends… One Killer… Is It Jen?

Dream big, burn hard: that’s the lesson that Jen’s learned over the years—make no mistake! She knows what they say about those that can’t being teachers, too, but it wasn’t through lack of trying that the acting never worked out. No. It’s not even that she minds teaching that much either, but she still can’t help but dream of seeing her name up in lights, immortalised in the galaxy of the stars. But Adeline’s famous these days, maybe that’s why Jen wants to come back from the reunion. See if her old friend can’t help her out of the hole she feels she’s fallen into. At the very least, she can find out where the hell the stupid dream came from in the first place. Maybe pull it up by the roots. Kill it for good.

Visit Emma at damppebbles tomorrow to find out about the next killer friend and tweet your best guess and reason using the hashtag #TheKillerYouKnow all day Friday.

You can purchase The Killer You Know here

One Reply to “The Killer You Know with S R Masters. Day Four.”