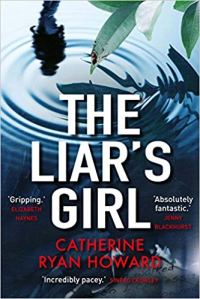 Her first love confessed to five murders. But the truth was so much worse.

Dublin’s notorious Canal Killer, Will Hurley, is ten years into his life sentence when the body of a young woman is fished out of the Grand Canal. Though detectives suspect they are dealing with a copycat, they turn to Will for help. He claims he has the information the police need, but will only give it to one person – the girl he was dating when he committed his horrific crimes.

Alison Smith has spent the last decade abroad, putting her shattered life in Ireland far behind her. But when she gets a request from Dublin imploring her to help prevent another senseless murder, she is pulled back to face the past – and the man – she’s worked so hard to forget.

With thanks to the publisher for the copy via Jellybooks.
The Liar’s Girl is the first book that I have read by Catherine Ryan Howard. It is a dual time frame novel with the same character. Set in modern-day where Alison has rebuilt her life in the Netherlands after the events that occurred when she was at university and also as they happened. You see her excitement at being away from home for the first time, socialising and meeting new friends and her first boyfriend Will. You also see how she has had to cope with loss and betrayal years later. Losing her best friend and her boyfriend and feeling guilty over both.
When a series of new murders occur the verdict against Will is in doubt and with pressure from the Gardaí she returns home to Ireland.
It is an excellent read. All of the characters and relationships felt real and unforced. I loved Alison’s relationship with Mam. Every scene she appeared in made me smile at some part it. Whilst this is a crime novel, the murders and the solving of them seem to take a back seat. The only one that is shown with any details is the murder of Liz. I thought this novel focused on the characters more and how they dealt with the situation. The most fascinating part for me was the friendship and death of Liz and how one-sided the friendship was. Liz was a manipulative person and not really a nice friend to have. But even though Alison knew all of her faults she had always accepted them and felt immense guilt and loss over her death.
I think this is a standalone novel but there is definitely potential for a series with the Gardaí, especially Malone, the guard who was happy to show his caring side.