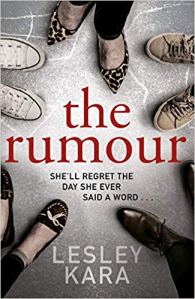 There’s a killer among us.

That’s all it takes.

To change a life –

She’s living under a new name.

Joanna is going to regret the day she ever said a word.

It’s rare that I review a book when it is a few months away from being published, but for this book I was happy to do so. I imagine that this book will be very popular. It was just what I needed to read after having a slight book slump, it was a book that I needed to carry on reading.
Joanna is struggling to fit into her new life after living in London and in a bid to make life easier for her son she engages in gossip at the school gate. It does get them accepted by the ‘in crowd’ but it places them in danger.
Joanna was a character I liked instantly. I sympathised with her predicament, she regretted what she said and she did it without thinking about the consequences. That people who were innocent could be accused of terrible things and have their lives ruined.
It is one of those novels that makes you suspect everybody. I did guess (correctly) fairly early, but it didn’t stop me enjoying the novel. There is a threat from more than one person. It only has short chapters and was very quick to read. Most of it is told by Joanna’s point of view but there are also glimpses of Sally and you see how she is coping with possible exposure.
The topic could be a difficult one. A child killer who herself was a child and who has been released whilst still young and the victim’s family seeing them lead a normal life. But the author shows both sides, that the killer has far from a normal life. Despite this it was difficult to warm to Sally though, even when you heard her side of the story and knew what her upbringing had been like and at times I did have sympathy.
There were many characters I liked, there were some sad lives and the author shows different ways of acceptance and coping. These will have to remain nameless because if you read this book you will suspect them just like I did.
A brilliant debut novel that I couldn’t put down and which had an ending that made my jaw drop. I’m sure it will do well.

With thanks to Alison Barrow for the signed proof and for the inviting me to the publicity launch at Theakston Crime.

One Reply to “The Rumour by Lesley Kara – Review.”