Sanjida Kay is one of my favourite authors and her new book My Mother’s Secret is due to be published on 3rd May. It is my pleasure today to host a guest post talking about cake, which there is a lot of in the book. I will tell you what the book is about first.

Lizzie Bradshaw. A student from the Lake District, forced to work away from home, who witnesses a terrible crime. But who will ultimately pay the price? Emma Taylor. A mother, a wife, and a woman with a dangerous secret. Can she keep her beloved family safely together? Stella Taylor. A disaffected teenager, determined to discover what her mother is hiding. But how far will she go to uncover the truth? And one man, powerful, manipulative and cunning, who controls all their destinies.

There are 25 different kinds of cake name-checked in My Mother’s Secret, from Daim cake bought over the counter in Ikea, to scones with cream and jam, and lavender shortbread, served with Earl Grey from Tyntesfield’s National Trust tea shop, to chocolate-orange brownies and courgette cake decorated with a cream-cheese frosting and scattered with rose petals and rosemary flowers, made by my protagonist, Emma Taylor.

‘The chocolate cake doesn’t rise, so Harry and I rescue it by soaking it with an espresso-rum syrup and layering it in tiers with salted-caramel butter cream.’
Emma Taylor

It’s an odd juxtaposition: cake and crime. Emma is a baker, working in Kate’s. Although she spends her days in what seems the most secure and seductively comforting of occupations – baking cakes and sourdough bread – Emma is anxious and nervous, hiding a terrible secret from her family and her friends. Whilst she rises around 4 a.m. to feed the yeast, her teenage daughter, Stella, is spying on her, determined to find out what her mother’s secret is. Meanwhile, a young student, Lizzie Bradshaw, out of her comfort zone in Leeds city centre, witnesses a shocking crime that will have repercussions for the rest of her life.

‘She doesn’t like alcohol in cakes. That’s Katie’s thing. And she isn’t into gluten-free or, you know, polenta. She doesn’t think it’s right for cake. Anyway, it’s what poor people eat.’ My dad winces, in spite of his best Dr Seuss face. ‘In developing countries like Mexico, I mean. You have to be middle-class to afford it here.’
Stella Taylor

The cakes – from the blackberry muffins, to the Black-forest gateau – are, of course, symbols of security, but in a thriller, nowhere, least of all the places where we live and work, are safe.
‘It sounds like something a pirate would eat.’
Paul Bradshaw

Whilst I was researching this novel, I had to delve into organised crime on the one hand, and on the other, hang out in a bakery (Hart’s Bakery in Bristol, which is the one Kate’s is based on) learning how to make croissants and discovering what on earth a friand is. Fortunately, I love baking anyhow so I found it a wonderful indulgence and a relief to write about cake in between the rather more chilling happenings in My Mother’s Secret.

‘She’d like a Victoria sponge with lots of cream and some fruit. Raspberries and jam. Something simple.’
He looks disappointed. I can see he wanted a statement of a cake. Like his love.
Stella Taylor

Unlike Emma, though, I don’t eat gluten and try not to consume sugar, so cake, in my real life, is an infrequent treat, usually made with polenta or gluten-free flour and sweetened with dates. Emma would not approve. 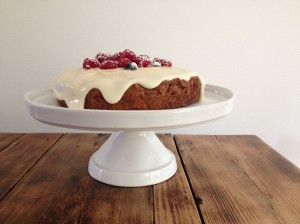