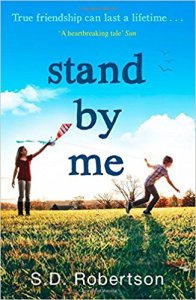 Today I am delighted to share with you an extract from Stand by Me by S. D Robertson. It is a book that I am looking forward to reading soon.

They’ll always have each other…won’t they?
Lisa and Elliot have been best friends ever since the day they met as children. Popular, bright and sporty, Lisa was Elliot’s biggest supporter when the school bullies made his life a misery, and for that, he will always be grateful.
Twenty years later, life has pulled the pair apart and Lisa is struggling. Her marriage is floundering, her teenage kids are being secretive, and she’s so tired she can’t think straight. So when Elliot knocks on the door, looking much better than she remembers, she can’t help but be delighted to see her old friend again.
With Elliot back in their lives, Lisa’s family problems begin to improve – he’s like the fairy godmother she never had. As their bond deepens, she realises how much she’s missed him, and prays that this is one friendship that will last a lifetime. But sometimes, life has other ideas…
A heartwarming story perfect for fans of Keith Stewart and Jojo Moyes, that will leave you with a tear in your eye but hope in your heart.

She remained at the door, shaking her head and smiling, watching her old friend walk down the pavement into the distance and thinking how wonderful it was to see him again. If someone had told her a week ago that this was going to happen, she wouldn’t have believed them. So much time had passed since they’d last seen each other that she’d given up on it ever happening.

Lisa had been heartbroken when he’d emigrated. Before that she’d always imagined that they would be lifelong friends; that they would visit each other at their respective universities and regularly meet up after graduating, even if they didn’t live in the same place. She’d hoped that as adults they’d get on with each other’s partners, be like honorary aunts and uncles to their respective kids, maybe even take their families on holiday together. It had never occurred to her that Elliot would be drawn to the other side of the world, forcing their lives apart.

And even after he’d left for Australia, Lisa had persuaded herself that he wouldn’t be gone long: that the pull of home would bring him back before she knew it. This had been her way of dealing with the loss, essentially by burying her head in the sand, although as the years passed and he didn’t return, she had no choice but to accept the truth.