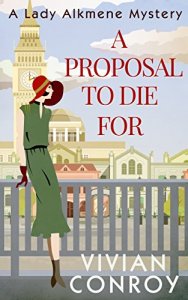 A murderous beginning
With her father away in India, Lady Alkmene Callender finds being left to her own devices in London intolerably dull, until the glamorous Broadway star Evelyn Steinbeck arrives in town! Gossip abounds about the New York socialite, but when Ms Steinbeck’s wealthy uncle, Silas Norwhich, is found dead Lady Alkmene finds her interest is piqued. Because this death sounds a lot to her like murder…
Desperate to uncover the truth, Lady Alkmene begins to look into Ms Steinbeck’s past – only to be hampered by the arrival of journalist, Jake Dubois – who believes she is merely an amateur lady-detective meddling in matters she knows nothing about!
But Lady Alkmene refuses to be deterred from the case and together they dig deeper, only to discover that some secrets should never come to light…
The twenties have never been so dangerous.

I don’t read much ‘cosy crime’, it’s usually when I need a break from the usual modern-day crime fiction books that tend to be more grim and which sometimes can be difficult to read. So, when I chose to read this book in preparation for book 4 which I will be reviewing in a few weeks time it was perfect timing.
It is the first book in the Alkmene Callender series and I enjoyed it a lot. I wish I had read it sooner, then I would have time to read book two and three, I feel that this is a series that I would really get into.
It is very sedate, Alkmene has too much time on her hands and decides to play private detective after overhearing a conversation at a party and then reading about a death in the paper. One of the people she heard talking stood to gain from the person’s death. She is helped in her investigation by Jake Dubois, a journalist and  possible ex-convict who would love to get a story into his paper.
It is only a short novel but packs a lot in. There is the crime to solve but it also shows the difference between social classes. Alkmene is upset by things that she sees and when she tries to help, struggles to accept that she might have made the situation worse. Jake has obviously had problems in his past and I wonder if more will be revealed further on in the series.
I liked both characters, Alkmene was like a young Miss Marple with Jake in the background to keep her safe and also make her aware that her world is different to most other people.
With thanks to Vivian Conroy for the initial contact and to the publisher for the copy received via netgalley.