Since her daughter went missing four years earlier, celebrated photographer Kurtiz Ross has been a woman alone. Her only companion her camera. Since Lizzie disappeared, she has blamed and isolated herself, given up hope. Until, out of the blue, an unexpected sighting of Lizzie is made in Paris.
Could this lead to the reconciliation she has dreamed of?
Within hours of Kurtiz arriving in Paris, the City of Light is plunged into a night of hell when a series of terrorist attacks bring the city to a standstill. Amid the fear and chaos, a hand reaches out. A sympathetic stranger in a café offers to help Kurtiz find her daughter.
A stranger’s guiding light
Neither knows what this harrowing night will deliver, but the other woman’s kindness – and her stories of her own love and loss in post-war Provence – shine light into the shadows, restoring hope, bringing the unexpected. Out of darkness and despair, new life rises. New beginnings unfold.
Dare she believe in a miracle?
Set during a time of bloodshed and chaos in one of the most beautiful cities on earth and along the warm fragrant shores of the Mediterranean, Kurtiz discovers that miracles really can happen.

Kurtiz is in Paris on the night of the Bataclan attacks in November 2015. She is getting increasingly desperate, not knowing if her husband had found their daughter at the concert and whether they were both safe. The subject matter is a little upsetting at times, it’s a recent event and there have been numerous terrorist attacks since that dreadful night. But the flashbacks to Marguerite and Charlie’s life were welcome respite.
It was Marguerite’s story I preferred. I enjoyed reading about her desire to be an actress and the development of her relationship with Charlie. She was a character I wasn’t keen on at first. She seemed a little self- obsessed but by the end of the novel she was my favourite character. I would love to read more about her life in future novels.
The desperation felt by Kurtiz was convincing, not being able to get answers regarding her family’s safety. The things that she witnessed combined with the images I remember from the news at the time were all realistic. As convincing was how hard the emergency services found the situation in which they had been placed. Needing to treat the injured, yet keep worried family members away from the scene.
Some of the novel I felt a little unconvinced by, but this was a novel I enjoyed reading.
With thanks to the publisher for the copy received and the opportunity to take part in the blog tour. 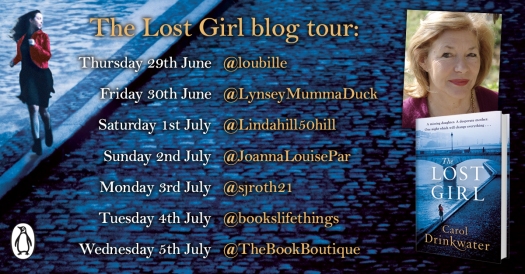 One Reply to “The Lost Girl by Carol Drinkwater – Blog Tour Review.”