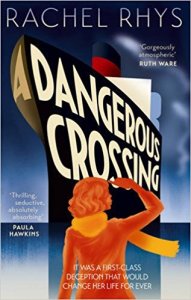 1939, Europe on the brink of war. Lily Shepherd leaves England on an ocean liner for Australia, escaping her life of drudgery for new horizons. She is instantly seduced by the world onboard: cocktails, black-tie balls and beautiful sunsets. Suddenly, Lily finds herself mingling with people who would otherwise never give her the time of day.

But soon she realizes her glamorous new friends are not what they seem. The rich and hedonistic Max and Eliza Campbell, mysterious and flirtatious Edward, and fascist George are all running away from tragedy and scandal even greater than her own.

By the time the ship docks, two passengers are dead, war has been declared, and life will never be the same again.

Lily has the chance of a lifetime travelling to Australia via an assisted package scheme. She is devastated at leaving her family, her father was badly injured in WW1 AND WW2 is a growing threat. But she knows that the best way of moving forward after a recent tragedy is to try and rebuild her life in new surroundings.
She soon makes friends onboard, some of them are on the same deck as her even though they are from a different background to her. She also makes friends with Eliza and Max, who are from a completely different world and Maria a young Austrian Jew who, because of the political situation has more reason than most to run away. But everybody is running from something and as the Orantes makes its long journey to Australia the secrets are slowly revealed.
I would never have thought I would read a crime novel that would take place in such a magical setting but Rachel Rhys has proved me wrong. The life on the upper deck with its balls and banquets and affluence of the first-class existence compared with the claustrophobic setting on lower levels. The tourist class deck where Lily shares a cramped cabin with two other women and the people she must dine with. And then the lower levels where the Jews and the Italians are practically hidden away.
I felt as thrilled as Lily and her friends at visiting new countries, all of which seems a normal activity now but in 1939 for a young woman it would have felt like a dream. I could sense the wonder at the beauty and the also the intimidation that she felt at times.
I was desperate to know the identity of the woman who was escorted from the Orantes in the prologue and shocked by the reveal. This was one secret that I didn’t work out.
Rachel Rhys is a pseudonym for a highly-respected author who I have never read. I plan to change that soon.
With thanks to Alison Barrow for the copy received.