1955. Two young couples move to the uninhabited, isolated fjord of Hedinsfjörður. Their stay ends abruptly when one of the women meets her death in mysterious circumstances. The case is never solved. Fifty years later an old photograph comes to light, and it becomes clear that the couples may not have been alone on the fjord after all…

In nearby Siglufjörður, young policeman Ari Thór tries to piece together what really happened that fateful night, in a town where no one wants to know, where secrets are a way of life. He’s assisted by Ísrún, a news reporter in Reykjavik who is investigating an increasingly chilling case of her own. Things take a sinister turn when a child goes missing in broad daylight. With a stalker on the loose, and the town of Siglufjörður in quarantine, the past might just come back to haunt them.

Haunting, frightening and complex, Rupture is a dark and atmospheric thriller from one of Iceland’s foremost crime writers.

Rupture is the latest book in The Dark Icelandic series and takes place immediately after Blackout. This series is now firmly established as one of my favourites. Ari Thór is more settled now in Siglufjörður despite the enforced quarantine in the town due to the death of a tourist. Because it is a quiet time with everybody staying in their homes he starts to look at a case from the 50s as a favour. Not a cold case as such, more of trying to identify a young man who was in a family photograph. One of the other people in the photo committed suicide shortly after the photo was taken.Ísrún also reappears, looking into a hit and run and the disappearance of a young boy. It was good to see her back, she is like a dog with a bone and stands up to Ivor when he attempts to bully her.
What I love about this series is there is no sense of urgency. Ari is not involved in the current cases, he is just concerned with the cold case. This thread of the story is the one that appealed to me the most. I love looking at old photos and if there was one person I didn’t recognize in a group photo I would get obsessed with who they were. Ari is rebuilding his relationship with Kristin and for the first time I started to like her. She came across as a warmer person than in the earlier novels.
Hedinsfjörður sounds beautifully isolated, the type of place that would be lovely to visit but would quickly feel intimidating by its remoteness. It felt spooky and this combined with certain scenes with Robert convinced me that Ragnar would make a great ghost story writer.
As I said earlier this is a series that I enjoy very much and I’m eagerly waiting for the signed copy of this book to arrive to add to my collection of signed first editions.
With thanks to Karen Sullivan for the early copy received for review. 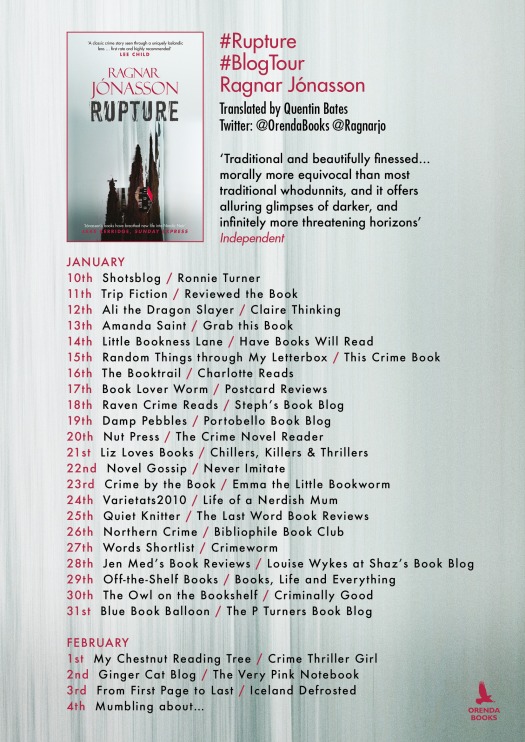 2 Replies to “Rupture by Ragnar Jónasson”