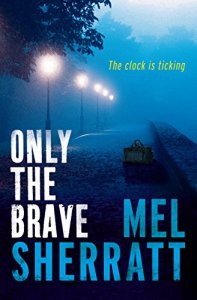 When one of the notorious Johnson brothers is murdered and a bag of money goes missing, a deadly game of cat and mouse is set in motion.
DS Allie Shenton and her team are called in to catch the killer, but the suspects are double-crossing each other and Allie has little time to untangle the web of lies.
As she delves deeper into the case, things take a personal turn when Allie realises she is being stalked by the very same person who attacked her sister seventeen years ago and left her for dead.
Set over forty-eight tension-filled hours, Only the Brave is the latest gut-churning book from acclaimed author Mel Sherratt.

When I first met Allie Shenton in Mel Sherratt’s debut novel I liked her very much and thought the storyline fantastic. Equally so in the follow up but then I did my usual trick of falling behind with a series. When I eventually got around to reading the third book it didn’t take me long to pick up where I left off.
The books are very closely linked, there is a very strong thread running through the series so if you haven’t read the previous two you might struggle slightly. They are very good though so I would recommend them anyway.
When the body of a local man is found on a rough estate there are plenty of suspects. Most of them are known to the police and having appeared earlier in the series also the reader. Some of them are victims but there are also some nasty characters, all of them very believable. Allie is struggling, her sister’s health has deteriorated and the case is very intense. The team are desperate to solve quickly and Allie hasn’t been as truthful with anybody about a continuous personal threat.
I have read two of Mel’s series of books now and whilst enjoying The Estate Series I like this one more. Allie is a character I really like, she isn’t a senior officer, constantly has to answer for her actions to her superior officers and keep her marriage on an even keel. Her marriage feels real, they are devoted to each other and her husband understands her commitment to her job and her guilt over her sister. I felt that a lot of research has been done, talking to serving officers on how they keep everything level. The case was also believable, you often see on the news about ongoing ‘situations’ in real life cases like the one that features in the book.
This book seemed to provide closure to a few of the storylines but I would love it if there will be more in the series.
With thanks to the publisher for the copy received via NetGalley.