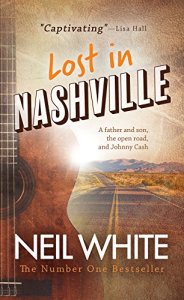 A father and son, the open road, and Johnny Cash.
Number one bestselling ebook author Neil White has penned an emotional journey through the life and songs of Johnny Cash, as told through the eyes of a fictional English lawyer, James Gray, whose life is a success. Or, at least, he thinks it is.
It has something missing though: a bond with his father, Bruce.
Bruce Gray is old, tired and estranged from his family. He spends his time drinking and drifting in the small seaside town in England that James once called home.
James decides to take Bruce on a road trip, to try to connect with his father through the one thing that has always united them: a love for Johnny Cash and his music. Together, they travel through Johnny Cash’s life; where he grew up, the places he sang about – a journey of discovery about Johnny, the South, and each other.
Always fascinating, an evocative and emotional personal road trip, Lost In Nashville will captivate you, inform you, and along the way may even break your heart.

Lost in Nashville tells the story of a son trying to rebuild his relationship with his father but it also tells the story of how Johnny Cash’s music was so popular across the decades.
Whilst I did enjoy the part of the novel regarding father and son, the most fascinating part of the novel for me concerned Johnny Cash and civil rights in American History. They start their journey at Johnny’s birthplace and are surprised by how understated the memorial is, expecting it to be more elaborate.
From then on there is the background to some of his big tracks, Busted, Hey Porter, Going to Memphis and Five Feet High and Rising to name just a few. But it is more than just the music, Neil White talks about Johnny Cash’s life, what it was like growing up in the depression and especially the death of his brother, his marriages and drug addiction.
The most fascinating part for me was the section of the book that covered Rosa Parks and the events in Selma. I had heard of Rosa Parks but never knew the story and Selma was just devastating. The film that I had to stop watching and the book that I couldn’t stop reading.
I cried in the book, not at the relationship between James and Bruce but when they visited Johnny’s resting place. He was an artist I was familiar with from being married to a huge fan who met him after a show years ago and who I hounded through much of the book with facts about the songs and making him play them. Since reading the book I have ‘listened’ to the type of music much more closely and the tales that they tell.
With thanks to the author for the copy received for review, I have since purchased the book.

One Reply to “Lost in Nashville by Neil White.”