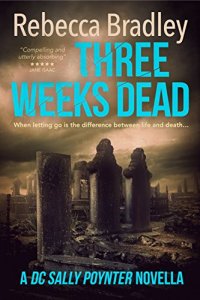 How far would you go if someone took your wife?

Especially, if you buried her a week ago.

When Jason Wells is faced with this scenario, he is confronted with the prospect of committing a crime that will have far-reaching consequences.

Can young DC Sally Poynter get through to him before he crosses that line, or does a desperate husband prove to be the case she won’t ever forget?

A prequel novella, set before Shallow Waters, the first in the DI Hannah Robbins series.

Having read and enjoyed the first two books in the Hannah Robbins series I was pleased that Rebecca Bradley had published a novella that was also a prequel to the other books. I have read prequels to an established series before but from memory this is the first that focuses on a different character. In this case it was Sally a junior member of the team.
The case that they ae investigating is kidnap, not unusual in itself but the victim is recently deceased and her bereaved husband will do anything to get her back. Sally connects to him and becomes his ally, the one person he will open up to. She is determined that this will be the case where she could prove herself as a valuable member of the team.
Rebecca does a great job of demonstrating how nervous and eager Sally felt about wanting to get her first result and show the established team that she was good enough to be part of them. Most were helpful to her although there was one obnoxious character. It made good reading how she handled him.
I imagine most who read this will have read at least one of the other books in the series so will approach this with similar emotions to myself. For those who haven’t it is a good introduction to a great little series. I have enjoyed getting to know Hannah, Sally and the rest of the close knit team.
With thanks to Rebecca for the copy received for review.

You can buy the book here

To see a guest post from Rebecca earlier this year about her transition from detective to crime writer see Rebecca Bradley Guest Post- Made to Be Broken.