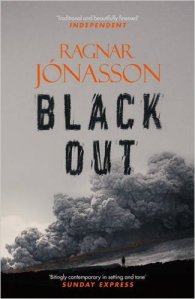 Today I am delighted to participate in the blog tour for Ragnar Jónasson’s latest novel Blackout.

On the shores of a tranquil fjord in Northern Iceland, a man is brutally beaten to death on a bright summer’s night. As the 24-hour light of the arctic summer is transformed into darkness by an ash cloud from a recent volcanic eruption, a young reporter leaves Reykjavik to investigate on her own, unaware that an innocent person’s life hangs in the balance. Ari Thor Arason and his colleagues on the tiny police force in Siglufjordur struggle with an increasingly perplexing case, while their own serious personal problems push them to the limit. What secrets does the dead man harbour, and what is the young reporter hiding? As silent, unspoken horrors from the past threaten them all, and the darkness deepens, it’s a race against time to find the killer before someone else dies… Dark, terrifying and complex, Blackout is an exceptional, atmospheric thriller from one of Iceland s finest crime writers.

Blackout is the third novel to be published by Orenda. The second book to be published, Nightblind was set a few years after the events in Snowblind the first one. I was eager to find out what had happened in the years between and this novel answers a few of those questions, being set soon after the first book.
Ari Thór is now a bit more settled and enjoying life more in the little town of Siglufjordur although he deeply regrets the break up with Kristín. Tómas is missing his wife who has moved away and Hlyner is haunted by events that happened when he was younger. It is the personal issues that affect all three that have been resolved with the publication of this book.
Throughout the novel the volcanic eruption that caused havoc over much of Europe is present. When a man who is working in the area is murdered Ari Thór and Tomas are helping in the investigation. At the same time a TV journalist is also conducting her own investigation into the death. There are mixed reports into the character of the dead man, some say he was a saint but there are also those who say he was somebody who couldn’t be trusted. Both the police and the journalist are keen to get answers.
Like the previous books, the murder is the main storyline but what goes on in the background is also very important. The story concerning Hlyner was quite upsetting and I did have some sympathy for him. The truth concerning Elias was also dark and sadly very believable. I would have liked to know more concerning this storyline, hopefully there will be more revealed in the next novel.
The characters who feature in the series are all strong and I love getting to know them. It’s not all about Ari Thor, but more about a close knit community. Some are nice people, some not but all feel real.
Thanks to Karen Sullivan for the copy received. I am thrilled that I have each of Ragnar’s books as signed limited edition hardbacks and I’m looking forward to adding to them.

2 Replies to “Blackout by Ragnar Jónasson”