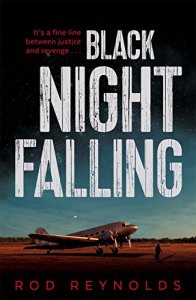 Having left Texarkana for the safety of the West Coast, reporter Charlie Yates finds himself drawn back to the South, to Hot Springs, Arkansas, as an old acquaintance asks for his help. This time it’s less of a story Charlie’s chasing, more of a desperate attempt to do the right thing before it’s too late.

Rod Reynolds’ exceptional second novel picks up just a few months on from The Dark Inside, and once again displays the feel for place, period and atmosphere which marked out his acclaimed debut.

To enjoy this novel, I would recommend that you read The Dark Inside first. There are quite strong links between the two, both in the storyline and relationships between the characters.
When Charlie Yates receives a telephone call out of the blue from Jimmy Robinson he is surprised and skeptical. Mainly due to boredom he decides to do as asked and heads out to the town called Hot Springs. Unfortunately, he is too late but what he discovers is enough to encourage him to stay around. Hot Springs is not the nicest of places, most of its economy is made from the casinos and prostitution. The people who live there are being controlled by bribes and threats. Yates soon realises that the people who have the power don’t want him around but if he stays he can find answers to what was troubling Jimmy and to what happened in Texarkana.
It’s a dark and compelling read. Even though it is set in the 1940s and not modern day, politics still has an effect on how things are run and each side demonstrate that they are both capable of violence and lies to further their own cause. Its likened to Raymond Chandler but I found it much more intimidating. Neither of the novels have the humour that is present in the Philip Marlowe novels. America is still recovering after the war and Yates is still trying to come to terms with his own war. I think that one of the reasons he wouldn’t give up and leave was due his own war experience, that he wanted to make amends. One of the reasons I think the book works so well is because of its authenticity, everything about it felt like it was 1946. I am really interested and what Rod Reynolds will do next.
With thanks to Real Readers for the copy received.