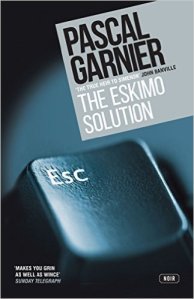 A crime writer uses the modest advance on his latest novel to rent a house on the Normandy coast. There should be little to distract him from his work besides walks on the windswept beach, but as he begins to tell the tale of forty-something Louis who, after dispatching his own mother, goes on to relieve others of their burdensome elderly relations events in his own life begin to overlap with the work of his imagination.

The Eskimo Solution is a clever, humorous novella that is about a novelist called Louis who has holed himself up in Normandy to write a book about a serial killer called Louis. He has ignored his editor’s comments that the book will be distasteful, determined to write what he wants to.
All the way through the reader is reading the author’s account and that of his creation. It is a little confusing at first but very original and at times shocking. The Louis in the novel is a much darker character, when the reader first meets him he is arguing with his wife over whether they should opt for burial or cremation. This was one of the more humorous parts of the novel and definitely encouraged me to read more. When he murders his mother to get his hands on his inheritance he sees it as an opportunity to do the same for friends who he thinks need his assistance. It doesn’t occur to him that he might be causing suffering instead.
Author Louis’s life isn’t as straight forward as he would like, his girlfriend wants him to go to England, her daughter is making life uncomfortable and his closest friend does something that brings the novel closer to home.
It’s a very unusual read, one that I enjoyed but will have to read again to really appreciate it. Like the really good shows on TV it is what happens in the background as well that makes a success. It probably wouldn’t have worked as a full length novel, for me part of its attraction was that it was only 144 pages. I have a few books on my kindle by Pascal Garnier which I am looking forward to reading soon.
With thanks to the publisher for the copy received via NetGalley.