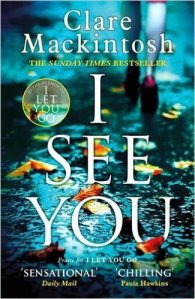 When Zoe Walker sees her photo in the classifieds section of a London newspaper, she is determined to find out why it’s there. There’s no explanation, no website: just a grainy image and a phone number. She takes it home to her family, who are convinced it’s just someone who looks like Zoe. But the next day the advert shows a photo of a different woman, and another the day after that.

Is it a mistake? A coincidence? Or is someone keeping track of every move they make . . .

I See You is an edge-of-your-seat, page-turning psychological thriller from one of the most exciting and successful British debut talents of 2015.

I Let You Go was one of my favourite books from 2015 and I was thrilled that it won the Theakston’s Crime Novel of year at last week’s festival.
It is set in London and has two main characters, one is Kelly a police officer who is determined to prove her worth after events in her past affected her career. The other is Zoe, a mother who is separated from her children’s father and in a new relationship with Simon a journalist. When she sees a photograph of herself in a local papers classified section she is worried and upset. Even though those close to her don’t take it seriously she soon realises that a different woman’s photograph feature each day. She decides to contact the police when she suspects that it could be more sinister.
The narrative switches between both women and infuriatingly always does so at a crucial point. This made if a very quick read because I couldn’t wait to see what happened next. Even if I should have been asleep. I did figure out some of what was going on in the background but had no idea at all who was responsible for the photos.
It’s a brilliant read, a worrying storyline if you are a commuter. The levels of paranoia from Zoe and guilt from Kelly were very believable. There was probably not as many twists as there was in I Let You Go but they are there and they are shocking. By the end I was minus a few fingernails and convinced that I had just read one of the best novels in recent months.
Very highly recommended, you won’t want to put it down.

One Reply to “I See You by Clare Mackintosh”