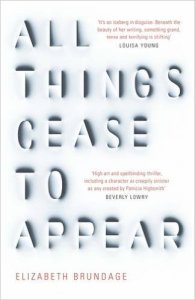 The farm stood at the foot of the hill. Around it, an aching emptiness of fields and wind. Within, a weight, a sense of being occupied, with more than its inhabitants.

The Clares got it cheap. George knew why, though he didn’t let on ­- he didn’t want to give Catherine any excuses. He’d given her an easy excuse to get married. He wasn’t prepared to give away much more.

Catherine, at home with their young daughter, has the feeling they’re not alone. She is helped by the Hale boys, young Cole and his brothers. Though they never tell her what happened to their mother in this house.

As the seasons burn and then bite, the Clares will find their place in this small upstate community. George, the inscrutable professor; his beautiful, brittle wife. He will try to tame the hollow need inside him. She will pull strength from the friends she makes. But as their marriage splinters, so too does the border between sanity and rage; between this world, and the inexplicable beyond.

With masterful tension and understanding of human nature, Elizabeth Brundage has crafted a novel that is at once a community’s landscape spanning twenty years and an intimate portrait of a disturbed mind. This is new American fiction at its most piercing, ambitious and chilling.

My Review:
I had expected this novel to be everything I enjoy in a novel, a combination of crime, history and ghost but ended up being a little disappointed. It started well, discovering what happened to the Hale family and then moving abruptly to the murder of Catherine Clare. It then covers the years that they spent together, starting from when they first met and finishing with her murder.
Unfortunately, most of this was slow going and it was only in the last third of the novel where I felt the need to read a little bit more. It was here that you started to realise exactly what type of person George was, self-obsessed, cruel and controlling. I could only admire Catherine for the way she tried to stand up to him.
The last part of the novel was mainly about the detective still haunted by the case twenty years later. I felt this part of the novel didn’t connect properly to the rest of it. Franny reappears, now an adult with no clear memories of her mother. I would have liked to get to know her more but she only had a fairly small role and I felt slightly unconvinced by her. Despite my misgivings about the actual story I liked the way it was written. I found it beautiful, atmospheric and the isolation was very convincing.
With thanks to Real Readers for the copy received.

One Reply to “All Things Cease To Appear by Elizabeth Brundage.”