Today I am delighted to welcome to my blog Rebecca Bradley to talk about her transition from fighting crime to writing crime.

From Fighting Crime to Writing Crime

First of all, before I start waffling, can I thank Steph for allowing me to come to her blog to ramble on about my life. I really appreciate your support Steph. Thank you. I owe you cake!

Some of you may know that I used to be a police detective in a previous life. It feels like a lifetime ago, but actually, I only retired a little over a year ago. Though before that, I was off sick as the medical retirement process was going through. You see, I have a genetic condition called Ehlers-Danlos Syndrome (EDS), which I didn’t know about until later in life and long after I joined the police. And EDS didn’t start to really affect me until I started to age.

But, my failing body isn’t what I’m here to talk about. Changing from detecting crime to writing about crime is why I’m here.

It’s funny, there’s something about crime that has always drawn me towards it. I suppose I’m lucky that it was the right side of the criminal line that I was attracted to, otherwise it could have been a whole different story.

When I first thought about applying for the police there were height restrictions in place so it was out of reach. (So to speak.) I’m only 5ft tall. It wasn’t until I was older and had already started my family that I was made aware that the restriction was no longer there. It had been classed as discriminatory and had been dropped. How was lack of height going to make anyone a lesser officer?

I joined up and I thrived. I adored being a uniformed officer. The camaraderie is brilliant. You’re at the sharp end of policing. Whatever is happening, if someone dials 999, uniform are the people who are sent. CID, or any other department that is needed, don’t come out until after uniform have first responded. So, being sent into unknown situations means you rely on each other and solid relationships are built.

I had great fun and I learnt a lot. I had to learn pretty quickly as well, particularly the art of how to talk to people, because where I was based, we didn’t get back up in a hurry, so instead of getting into a situation that would need us to call for it, we learnt to diffuse the incident by talking. And with my lack of height and muscle mass, I really had to rely on my mouth. It served me well. And, I made some great friends. Don’t get me wrong though, I did hold my own when it was needed, when things got physical. You just don’t choose that option first.

But, I wanted more, I wanted to push my brain more, I wanted to be a detective. Several years later, I did just that and in a specialist unit dealing with sexual exploitation. A tough department indeed. There are things you can never unsee. But, you know you’re looking at some of the worst humanity has to offer and when you get them, that balances out the bad days. And working there is why my first novel, Shallow Waters deals with such a heavy subject straight off. I knew the world.

Like many people, I had an urge to write a novel. A birthday I wasn’t happy about loomed in front of me like a giant tidal wave threatening to wipe me out and I decided that if I didn’t write it then, I was never going to. So, between the day job and family commitments, I started typing, retyping and retyping some more. Shallow Waters was the result.

Because when my body forced me to give up the job I loved, I then had another career to move to, that I also loved.

Exploring the world through my characters. I am able to write at a pace I can cope with and though that pace changes on a daily basis I continue onward. Writing is still fairly new to me, but it is something I intend to make a long career out of.

I miss policing. I really do. But, I am so glad I have my writing. It has been, and is, a lifesaver. And with my experience, I can channel it into my writing to give my work a unique authenticity. As I write about the custody block I can smell that closed in, dirty people, mixed with disinfectant, mixed with microwaved meals, smell, it’s all there for me.

Fighting crime and writing crime are two very different jobs, but for me, they are both big loves and I am very lucky to have managed to have done both of them.

A rising death toll. A city in panic.

A young mother is found dead in her home with no obvious cause of death. As DI Hannah Robbins and her team investigate, it soon becomes clear that the woman is the first in a long line of murders by poison.

With the body count climbing, and the city of Nottingham in social meltdown, the team finds themselves in a deadly race against a serial killer determined to prove a point.

And Hannah finds herself targeting an individual with whom she has more in common than she could possibly know.

Rebecca Bradley is a retired police detective who lives in Nottinghamshire with her family and her two cockapoo’s, Alfie and Lola, who keep her company while she writes. Rebecca needs to drink copious amounts of tea to function throughout the day and if she could, she would survive on a diet of tea and cake while committing murder on a regular basis, in her writing of course.  Sign up to the newsletter on the blog at rebeccabradleycrime.com, to receive the first five chapters of Made to be Broken and for exclusive content and giveaways. 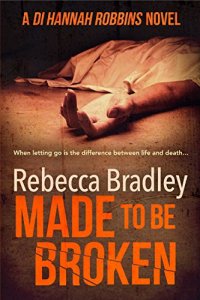 To read more about Rebecca

To buy Made to Be Broken

3 Replies to “Rebecca Bradley Guest Post- Made to Be Broken.”