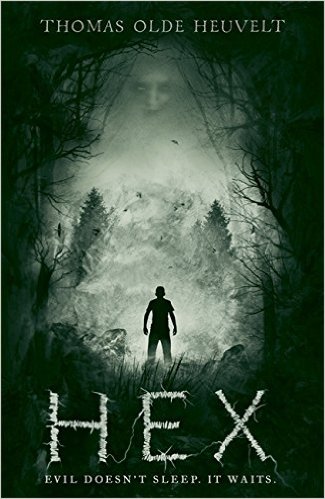 Welcome to Black Spring, the seemingly picturesque Hudson Valley town haunted by the Black Rock Witch, a seventeenth-century woman whose eyes and mouth are sewn shut. Blind and silenced, she walks the streets and enters homes at will. She stands next to children’s beds for nights on end. So accustomed to her have the townsfolk become that they often forget she’s there. Or what a threat she poses. Because if the stitches are ever cut open, the story goes, the whole town will die.

The curse must not be allowed to spread. The elders of Black Spring have used high-tech surveillance to quarantine the town. Frustrated with being kept in lockdown, the town’s teenagers decide to break the strict regulations and go viral with the haunting. But, in so doing, they send the town spiralling into a dark nightmare

I had been looking forward to reading Hex for months and have to say that I was slightly disappointed. It started off well, when the newcomers were told how life would be for them and how spooked the animals were.

The only characters who felt well developed were Grim and Katherine and I did enjoy the parts of the novel where they featured. I struggled to take the storyline with the teenagers seriously. At first, it was humorous but I didn’t really understand why or how it ended up being much more sinister.

I had fully expected it to be similar to Stephen King’s novels and being scared to go into a dark room but sadly it wasn’t to be.

With thanks to the publisher for the copy received via NetGalley.