September 1977. Mette Misvær, a three-year-old girl disappears without trace from the sandpit outside her home. Her tiny, close middle-class community in the tranquil suburb of Nordas is devastated, but their enquiries and the police produce nothing. Curtains twitch, suspicions are raised, but Mette is never found. Almost 25 years later, as the expiry date for the statute of limitations draws near, Mette’s mother approaches PI Varg Veum, in a last, desperate attempt to find out what happened to her daughter. As Veum starts to dig, he uncovers an intricate web of secrets, lies and shocking events that have been methodically concealed. When another brutal incident takes place, a pattern begins to emerge … Chilling, shocking and full of extraordinary twists and turns, Where Roses Never Die reaffirms Gunnar Staalesen as one of the world’s foremost thriller writer.

Where Roses Never Die is the first book I have read by Gunnar Staaleson. It’s a great introduction to the Private Investigator Varg Veum. He is a troubled man, very much alone for the last three years and spending too much time drowning his sorrows in Aquavit.

When he is asked to try and find out what happened to Mette Misvær twenty-five years earlier he uses the case to try and get back on his feet, both emotionally and financially. The local police tolerate him and there is definitely bad feeling with at least one of them.

The case is all about uncovering secrets, and there are plenty of them. Some are seedy and Varg struggles to hide his disapproval. Some are devastating and cause more suffering when he forces memories to be discussed.

I loved Varg’s character. He was a morally strong, often cynical person who wasn’t afraid to speak his mind even if it meant getting hurt. All sides of society were present, the ones who were down on their luck and wanted to stay invisible and the ones who had no regard for anybody else.  And all felt very believable.

I hope the earlier books will all be translated, at the moment there are three that have been. I would like to read them in order and get to know more about Varg.

With thanks to Karen Sullivan for the copy received. Details of the blog tour are below. 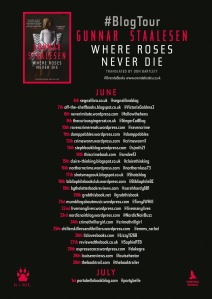