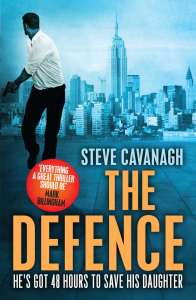 Its been over a year since Eddie vowed never to set foot in a courtroom again. But now he doesn’t have a choice. Olek Volchek, the infamous head of the Russian mafia in New York, has strapped a bomb to Eddie’s back and kidnapped his ten-year-old daughter, Amy. Eddie only has forty-eight hours to defend Volchek in an impossible murder trial – and win – if he wants to save his daughter.

Under the scrutiny of the media and the FBI, Eddie must use his razor-sharp wit and every con-artist trick in the book to defend his ‘client’ and ensure Amy’s safety. With the timer on his back ticking away, can Eddie convince the jury of the impossible?

It’s a few years since I have read a legal thriller, the ones I have read were ok but nothing memorable. I decided to download The Defence after seeing a lot of reviews praising it, I have to say that I agree, it really is very good. I decided to read it just before the release of the follow up book The Plea then I wouldn’t have to wait months for it to be published.
The start is very intense, Eddie knows how much danger both he and his family are in from the opening few pages. He isn’t sure if and how he will succeed, just that he has no other option. He has to do what they say. The people who he has to deal with are ruthless but Eddie is tough. He isn’t squeaky clean and has a few tricks of his own. He also has people he can rely on when things get bad.
It’s everything I love to read in a book. Drama, fear, humour, and the feeling that I had to keep on reading the book. Just one more chapter was a phrase I used often. After reading this I’m really looking forward to reading the follow up and I’m glad I already have it on my kindle.