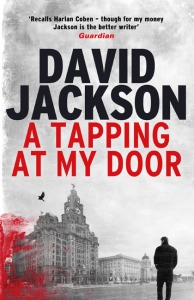 Today I am pleased to welcome David Jackson to my blog to talk about Liverpool, the city where his new novel is set.

While reading I was struck by the love for Liverpool which seemed to pour out the book. I actually felt that the city was a character in its own right. Was there a purposeful effort to show Liverpool in its best light or does a natural enthusiasm shine through?

I think it happens naturally. Like any city, Liverpool has its rough areas, its pockets of deprivation and decay. But it’s a city with a heart that many others don’t always seem to possess. And if you ever get bored of the culture, the history, the music and the football, then there is always the people. You will never go short of someone to talk to in Liverpool.
Do you have favourite parts of the city where you like to visit or spend time?

The area around Hope Street is my usual haunt. Here you’ll find the city’s two cathedrals, the Everyman theatre, the Philharmonic Hall, lots of restaurants, and numerous great pubs.
What do you think the international perception of Liverpool is? Is it defined by its Favourite Sons, its football, on tragedy or past successes? And to take that a step further – if you think the international perception is perhaps not how you would wish the city to be viewed then how would you ‘sell’ the city?

To be honest, it’s not so much the international perception I worry about as the national one. Tourists flock here in huge numbers because of the Beatles, the waterfront, the music, the football, and so on. But within Britain itself I think there is still a substantial fraction of the population that regards Liverpool as the home of thieves, drug-dealers and various other undesirables – an opinion largely fuelled by the press and other media. It is only when people visit that they discover what a wonderful, welcoming city it is.

Thanks David for taking the time to answer some questions. You can read my review here