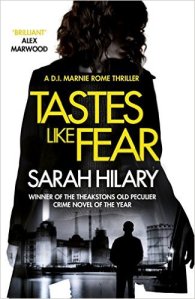 The young girl who causes the fatal car crash disappears from the scene.

A runaway who doesn’t want to be found, she only wants to go home.

To the one man who understands her.

Just as he gives shelter to the other lost girls who live in his house.
He’s the head of her new family.

D.I. Marnie Rome has faced many dangerous criminals but she has never come up against a man like Harm. She thinks that she knows families, their secrets and their fault lines. But as she begins investigating the girl’s disappearance nothing can prepare her for what she’s about to face.

I have followed Sarah Hilary’s excellent series since receiving the first novel at Theakston’s Crime festival a few years ago. I really enjoyed that book, which later won crime novel of the year in 2015. In my opinion the books have got better with each one and this third in the series is one of the best books that I have read this year.
Both Marnie and Noah are keen to solve the disappearances of teenage girls, they had been looking for one girl, May, for a few months. When another girl causes a fatal car accident and then disappears they become involved. Marnie recognises much of herself in May’s sister. She can see the anger and the hurt that Loz is feeling but it is Noah who feels more able to help her.
There is much of our society that features in the novel, vulnerable elderly women, teenage girl gangs terrorising estates and the invisible homeless. But there is more to it than I initially thought. I never saw any of the surprises/ shocks and there was at least one occasion when ‘my heart was in my mouth’.
Marnie, Noah and the other members of the team are all very strong and believable characters. I like the way that they interact with each other. You also get glimpses of their lives away from the job as well. Marnie’s relationship with Steven is one that I expect to see get very interesting.

Tastes Like Fear will be published on 7th April. With thanks to Headline and Sarah Hilary for the copy received for review.

One Reply to “Tastes Like Fear by Sarah Hilary”