Today’s blog post is a little bit different. I am thrilled to welcome to my blog David Mark, creator of the fabulous detective series that features Aector McAvoy. As he says in his piece, the reader is often disappointed when a favourite book is made into a film or TV series with the wrong cast. But enough from me, this is David’s own selection for the cast of his new book, Dead Pretty.

David Mark assembles his dream cast – if and when his McAvoy makes it to the screen…
Readers often take umbrage when liberties are taken with their beloved literary heroes. Lee Child may be the greatest thriller writer of his generation but millions of people around the world seem intent on slapping him with a haddock for allowing Tom Cruise to inhabit the size 14 shoes of Jack Reacher.

I understand that level of ire. As readers, we have very clear ideas of what our favourite fictional characters look, sound and act like. I still sometimes weep over the decision to cast Michael Gambon as Professor Dumbledore.

As authors, it’s a different situation. A couple of years back, the rights to my first novel were snapped up by a major TV company and I enjoyed lots of lovely lunches with the sort of people who would ignore a telephone call from Kenneth Branagh so as not to be distracted from one of my rambling anecdotes. It was all rather jolly. The adaptation never happened, of course. I don’t think the guy in charge had even read the book. But it was quite exciting while it lasted. Since then, lots of people have asked me who I would cast, if given free rein, in a small-screen version of the Mcavoy books. This is the kind of thing that stops me sleeping, I hope you understand.

So, to coincide with the launch of the new McAvoy book, DEAD PRETTY, here’s my guide to who I would want to walk in the characters’ shoes, and why.

Aector McAvoy – Rory McCann
“I’m learning from Lee here. When you write about a character who is enormous, it pays to cast an enormous man in the role – otherwise people get upset and bang on about it endlessly at every bloody event you agree to attend. McAvoy is big and hulking, but he’s also a total softie who blushes and talks like a poet. Rory McCann may not have shown much tenderness in Game of Thrones but I’ve watched his audition tape for his role as Clegane and he has the right kind of tired wisdom in his eyes. He’s also physically very able and generally rather handsome. He may be a few years older than Aector but I’ll forgive him that. Plus, he has the right accent. I’ve wanted him for the role since I wrote the first book.”

Roisin McAvoy – Eleanor Tomlinson
“Roisin is Aector’s centre. She’s his heart. She’s gentle and loving and very shrewd. She’s also capable of cutting you off at the knees and burying you upside down in the garden. Eleanor Tomlinson has all that. She was mesmerising in Poldark and I would love to see her play a role that was an equal to the male lead – not subservient to it. With a Romany accent and a lot of leopard-print, she would be a fierce foil for Aector and there’s no doubt the camera loves her.”

DSU Trish Pharaoh – Polly Walker/Jessica Hynes/Lisa Stansfield
“Trish is probably my favourite character. She’s clever, tough, motherly, sexy and ferocious. Nobody knows what’s going on inside her head unless she wants them too. She’s in her mid-forties and drinks too much and doesn’t have the kind of body that suggests she spends a lot of time on a treadmill. I’d like somebody of the right age to play her. I adored Polly Walker in Rome, but Trish is funny as well as hard and I’d love to see Jessica Hynes have fun with her lines. I’ve also got a bizarre idea that Lisa Stansfield would be ace.”

DC Helen Tremberg – Gwendoline Christie
“Helen is the most likely to have her own series one day and she’s one of the most important characters so I’ve thought long and hard about this. Helen’s tall, physically formidable and enjoys each packet of crisps more than the last. She’s also a bit hopeless in love and worries that she’s likely to put her new baby in the oven and the Christmas turkey in the cot. I think Gwendoline Christie would be superb. She may play a swordswoman in armour in her most famous role but she has vulnerability about her and I’d love to see her in a Hull pub interrogating an armed robber over a pint of real ale.” 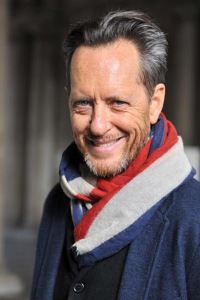 Former DCI Colin Ray – Richard E Grant
“Stick with me here … Colin Ray is the ratty, feral, utterly disgusting former DCI whose whereabouts at the start of Dead Pretty are unknown. I adore Richard E Grant and I think he would be superb at the kind of snarling, bitter, bile-infused invective that Colin likes to spray.”

Reuben Hollow – James Purefoy
“The character of Reuben Hollow is at the centre of Dead Pretty. He’s just had a conviction for murder overturned and is back living in his ramshackle house in the woods with his teenage daughter. He’s a sculptor and very handsome and poetic, and there is something connecting him to Trish Pharaoh that is causing McAvoy a lot of disquiet. James Purefoy would be perfect. He does gentle just as well as the psychotics he has played in the past.”

Delphine – Mimi Keene
“Reuben’s teenage daughter may have a small role in the events that unfold but she’s important. She’s a scruffy but pretty teen; carefree in dungarees and welly boots and smelling of cut grass and crushed fruit. She needs to have a knowing innocence to her. Step forward Mime Keene.”

Teddy and Foley – Jason Flemyng and Ben Drew
“The two London hitmen are a curious duo. There is a tenderness between them but they are capable of colossal acts of violence. Teddy is the older, more circumspect villain. He’s quiet and thoughtful. Foley wants to hurt people. He burps and scratches and snorts an spits and should remind you of every person you have crossed the road to avoid. Jason Flemyng and Ben Drew would be perfect as a twosome.”

Doug Roper – Paddy Considine
“Since the very first book, the name of Doug Roper has cropped up again and again. He’s always been there in the shadows, curling around thinks like the ghost of a serpent. The former head of CID, he was responsible for so much of McAvoy’s misery and is now a very important figure in what is to come. He’s handsome, well-dressed, and evil to his bones. Paddy Considine is one of my favourite actors. He’d be amazing.”

“Paddy’s directorial debut, Tyrannosaur, was unquestionably bleak and horrible, but it was also a magnificent piece of film-making. It struck the tone it sought absolutely head-on: this world of people trapped by circumstance, seeking refuge or escape through vices that plunge them deeper into the abyss. McAvoy walks through a world like that. I would love to see Paddy’s vision of Hull.”

Hannah Kelly has been missing for nine months. Ava Delaney has been dead for five days.

One girl to find. One girl to avenge. And DS Aector McAvoy won’t let either of them go until justice can be done.

But some people have their own ideas of what justice means…

DEAD PRETTY is the stunning new novel from one of Britain’s most original crime writers.

I would like to thank David for giving up his valuable time to pick his ideal cast.

One Reply to “The Casting Couch- David Mark guest post”